On Monday, the internet had some laughs at a Google glitch that listed Shaquille O’Neal as the fifth member of ’90s boy band *NSYNC.

Along with changing what it means to be an NBA center, Shaq was apparently tearin’ up hearts with Justin Timberlake, Lance Bass, JC Chasez and Chris Kirkpatrick in the late ’90s.

✔@LanceBass
Y’all who did this?!

Shaquille O’Neal did not replace Joey Fatone in *NSYNC

While O’Neal clearly was not a hidden member of *NSYNC — there’s no disguising a 7-1, 325 body in that lineup — he did apparently play a contributing role in the rise of the boy band.

Bass told TMZ that O’Neal “had a big hand” in starting *NSYNC’s career by allowing the group to use his Orlando-area mansion to record their music.

“We lived in Orlando, and our first place that we recorded was his house,” Bass told TMZ. “So all of our first demos, our first songs were all from Shaq’s house.”

Shaq confirms that *NSYNC did hang out at his house

O’Neal confirmed Bass’ story during TNT’s pregame coverage of Tuesday’s game between the Houston Rockets and Golden State Warriors. And apparently *NSYNC wasn’t the only monster boy band of the era recording with Shaq’s assistance. 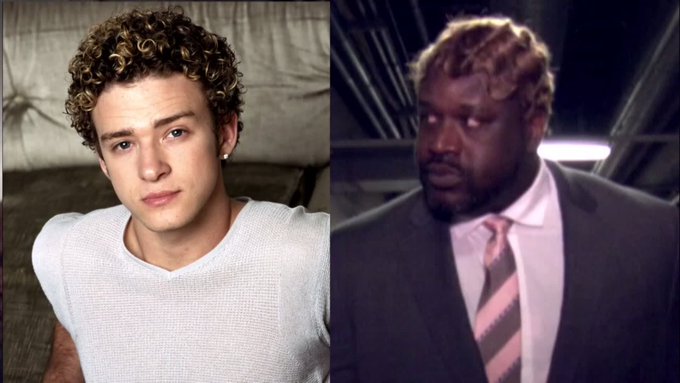 “When they were young, they recorded their first album at my house,” O’Neal said. “*NSYNC and Backstreet Boys. True story.”

In case you’re interested, O’Neal just listed that lakeside palace for the low-low price of $28 million. He’s probably not too mad at the news getting out about the mansion’s boy-band connection.