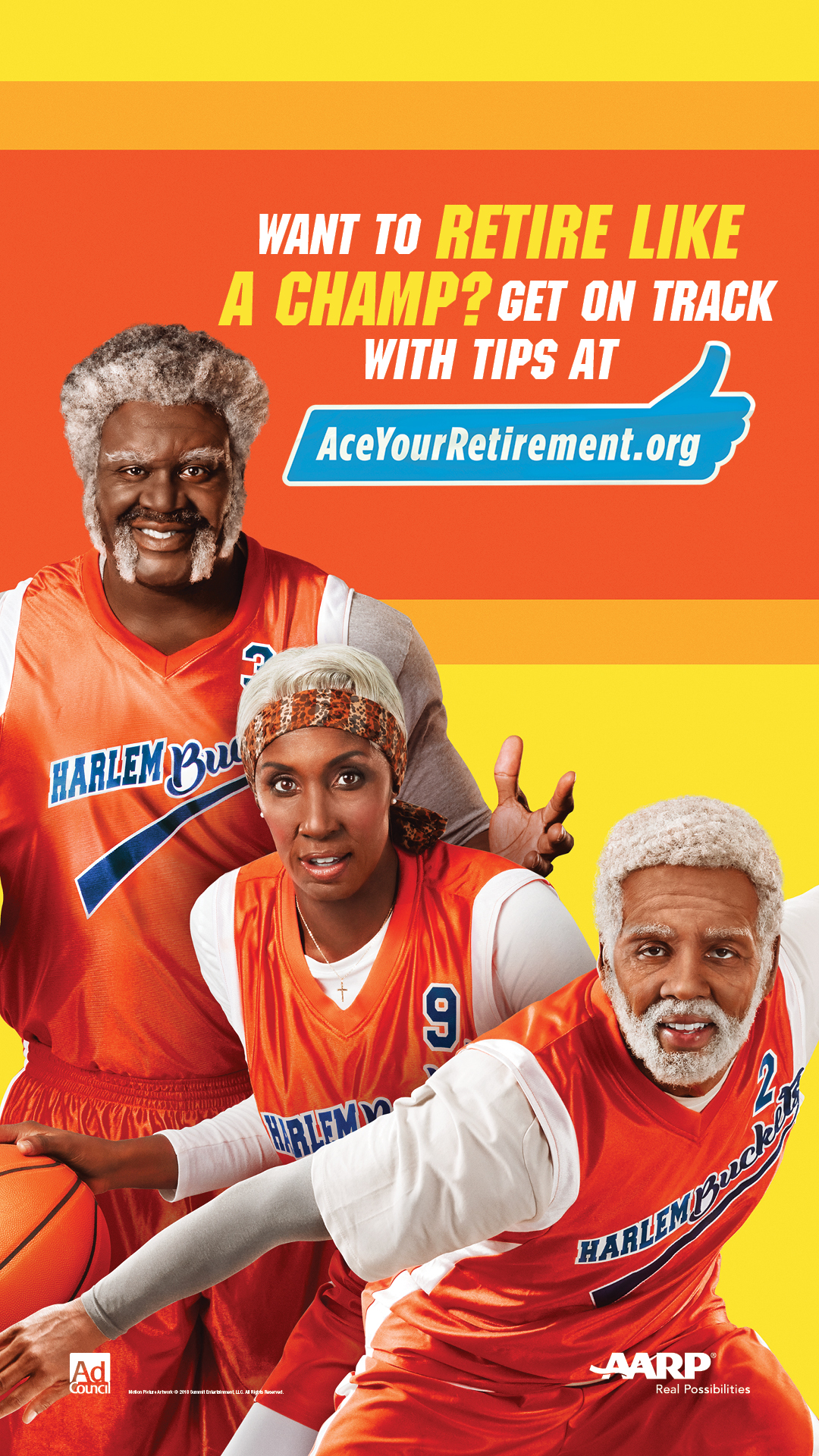 The new PSAs are the latest extension of AARP and the Ad Council’s Savings for Retirement campaign, which encourages Americans in their forties and fifties to visit AceYourRetirement.org for a personalized action plan. According to the National Institute on Retirement Security, two in five households headed by Americans age 55-64 have no assets saved for retirement.*

“We’re pleased that Kyrie Irving, Shaquille O’Neal and the other Uncle Drew characters are joining our campaign to urge Americans to take a few simple steps now that will greatly improve their prospects for a financially secure retirement,” said Debra Whitman, Executive Vice President and Chief Public Policy Officer, AARP. “The latest research shows that only one-third of current retirees are very confident in their ability to live comfortably throughout their retirement.”**

Uncle Drew, in theaters June 29, tells the story of an iconic 75-year-old streetball legend, played by basketball superstar Kyrie Irving, who is known for his amazing handles and ability to get to the rim. The PSA reminds viewers that just like Uncle Drew aces his basketball game, they have what it takes to start acing retirement.

“We’re delighted to be working with one of the nation’s leading organizations, AARP, and the Ad Council in their important and timely campaign,” said Lionsgate Senior Vice President of Global Partnerships and Promotions Paula Kupfer. “We’re proud that our content and characters can support their messaging because Uncle Drew truly demonstrates that you can do what you set your mind to do.”

In keeping with the encouraging tone of this campaign’s PSAs, the Uncle Drew spot celebrates the financial milestones and personal successes many viewers have already aced—from their dream ride to their dream vacation—and urges them to “make your retirement as legendary as you are.”

“The character of Uncle Drew is a perfect testament to the fact that we all have the potential to achieve so much – no matter our age or situation,” said Lisa Sherman, President & CEO, the Ad Council. “Over 300,000 people have already taken action to get on track since this campaign launched last summer, and we’re thrilled to partner with Lionsgate in continuing to share this empowering message.”

The new PSAs will run in donated time and space, per the Ad Council’s model. They are available in TV, outdoor and print formats nationwide.

Uncle Drew, which will be released nationwide on Lionsgate’s Summit Entertainment label, is also produced by Temple Hill in association with Pepsi Productions.

About Uncle Drew
After draining his life savings to enter a team in the Rucker Classic street ball tournament in Harlem, Dax (Lil Rel Howery) is dealt a series of unfortunate setbacks, including losing his team to his longtime rival (Nick Kroll). Desperate to win the tournament and the cash prize, Dax stumbles upon the man, the myth, the legend UNCLE DREW (NBA All-Star Kyrie Irving) and convinces him to return to the court one more time. The two men embark on a road trip to round up Drew’s old basketball squad (Shaquille O’Neal, Chris Webber, Reggie Miller, Nate Robinson, and Lisa Leslie) and prove that a group of seniors can still win the big one. A LIONSGATE’S SUMMIT ENTERTAINMENT Release. Produced by Temple Hill in association with Pepsi Productions. In theaters nationwide June 29, 2018.

About Lionsgate
The first major new studio in decades, Lionsgate is a global content platform whose films, television series, digital products and linear and over-the-top platforms reach next generation audiences around the world. In addition to its filmed entertainment leadership, Lionsgate content drives a growing presence in interactive and location-based entertainment, gaming, virtual reality and other new entertainment technologies. Lionsgate’s content initiatives are backed by a 16,000-title film and television library and delivered through a global licensing infrastructure. The Lionsgate brand is synonymous with original, daring and ground-breaking content created with special emphasis on the evolving patterns and diverse composition of the Company’s worldwide consumer base.