As part of a promotion for World Chocolate Day on Saturday, Shaquille O’Neal brought Krispy Kreme donuts to share with fans. After passing out plenty of sugar and hats, taking some selfies and signing some autographs, O’Neal chatted with The Crossover to talk the state of the Lakers, LeBron James and, of course, chocolate. 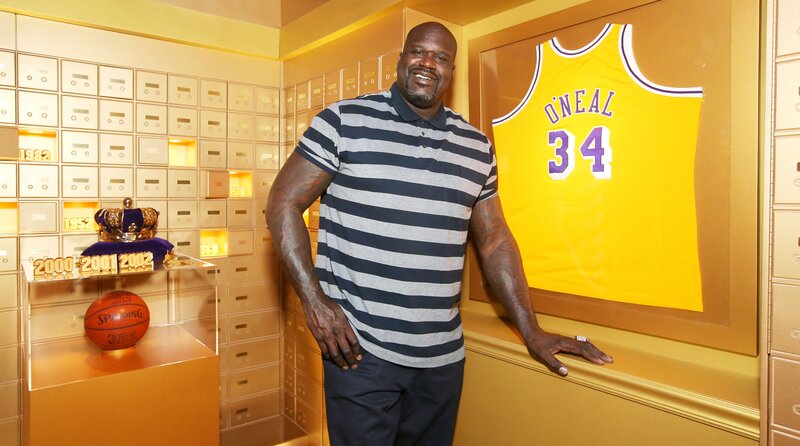 Charlotte Carroll: For the promotional video for World Chocolate Day, you learned how to say chocolate in a bunch of languages. Do you speak any other languages or wish you did?
Shaquille O’Neal: No, I’m kicking myself. I grew up in a Spanish community of San Antonio Texas and when I was taking Spanish classes, I was messing around. I was like, “I don’t need to speak Spanish.” Now I’m kicking myself. Everybody is talking in Spanish, and I’m like, “Damn, Ok.” So I’ve talked about into the Rosetta Stone thing but my ADHD kicked in all the way. Like if I’m doing it and I hear the game in the background, I’m just going to stop what I’m doing and watch the game.

CC: What’s your favorite donut from Krispy Kreme?
SO: The original glaze. The OG is what they call it?

CC: How many can you eat?
SO: I could probably eat two dozen right away, real fast.

CC: Do you have a prediction on who’s going to win the World Cup?
SO: France.

CC: Since you know LeBron personally, did you talk to him at all leading into this free agency?

SO: No, but I told people, if you follow patterns, when he was in Cleveland, he bought a very expensive house in Miami. Ended up playing in Miami. He lives in Cleveland and bought a super expensive house in L.A. I know he’s rich but we don’t like to waste money, so we’re not going to have a $20 million dollar house in Cleveland and have another $20 million house just sitting. So I kind of knew he was going to L.A. the whole time. I knew.

CC: Did you put money on that at all?
SO: No, I didn’t put money on that. I just knew cause I know people and the patterns. People have said he had his sons enrolling in different schools. LeBron loves his family and he’s not going to be away from them.

CC: Where do you think Carmelo Anthony is going? L.A.?
SO: I don’t know, hopefully he’s going to a team that has a chance to win.

CC: You  said the Lakers won’t win until they get more pieces. What are those pieces or who are those people?

SO: It’s not about the pieces; it’s about how the pieces play. The good thing about the Warriors is you know they have all those superstars. They play a beautiful style of basketball. Everyone is touching the ball. Nobody has to carry the team, no one has to carry their own. And they play defense. So if you get a team that consistently does that, like when they played Houston in the Western Conference final, I knew Houston wasn’t going to win. A lot of people were going to say Chris [Paul] was hurt, but you can’t beat people playing 1–on–1.

CC: How does LeBron going to the Lakers change L.A. or does it?
SO: It doesn’t.

CC: Do you think the legacy and caliber of players on the Lakers matters?
SO: His team is definitely not better than the one he had. They’re going to definitely need some more pieces. L.A. offers different things—lifestyle, better lifestyle than the one in Cleveland. Better nightlife and more to do, more production meetings, more movie meetings. You don’t have to leave the state.

CC: From a basketball perspective, what do the Lakers offer that the Heat or Cavs couldn’t?
SO: He gives L.A. some type of energy but they’re only going to give him that energy back if he wins. Like, they’ll probably let him go the first year, “Ok, one more year.” But Year 3 or 4, if he hasn’t won, he will feel it.

CC: From your experience, what is that feeling like and the pressure?

SO: It was terrible. And it probably feels terrible on steroids in this time we live in now. When I was coming up, it was only three or four outlets that can talk about you. Now there’s memes, people’s stories, news outlets, podcasts, so it’s a lot of pressure. That’s probably why you got these guys forming Superteams, so they can get their championship win out of the way.

CC: You were younger when you moved to the Lakers and you felt that. Now that LeBron is older, do you think he still feels that the same way? Or is it different with age?
SO: I think right now, his process is to have more than Steph Curry. When you win championships, you want to outdo your opponent. He has three and for a while he was up there by himself. Now Steph Curry has three. So I’m sure his mindset is, “I got to get four, before he gets four.”

CC: When you talked about the greats of each era, first it was Dr. J (Julius Erving) and Magic Johnson, then it was Michael Jordan and then you and Kobe Bryant and now it’s James. Who do you think is the next great or is it too early to tell?
SO: I got to go with either (Russell) Westbrook or Curry.

CC: Why?
SO: Westbrook, the way he plays and his intensity, there’s never been a guy like him. And Curry, he’s a phenomenal shooter. And after LeBron leaves, it’ll probably be KD’s league for a while, but KD is in the middle.

Thanks so much Shaq for answering all our questions, if you have a question for Shaquille O’Neal use #AskShaq on Twitter or email Shaq@Shaqfuradio.com