We already know the Big Man is also Big on social medial. Heck, our very own ShaqFu Radio page on Facebook has over one hundred thousand followers. (Big shoutout and thanks to all you FB fans!) That’s the good / fun / interesting part of social media and all those cool, random posts.

Still, you never know how people are going to react to your posts, right? Isn’t that part of the fun (or the agony?). Thumbs up! Thumbs down! Poop emojis…. When someone posts a photo of themselves, their pets, their family, their vacation, it’s almost impossible to determine what people will comment on the most… if anything.

But when you’re Shaq… or rap star 50 Cent – there’s never a worry about getting only crickets when the latest post goes live. Such was the case when 50 Cent shared a photo with the world recently. The two stars visited and where on the entertainment-news show “Access Hollywood,” and the Instagram photos came soon afterward.

Submitted for your approval: The pic below with Shaq, 50 Cent and show hosts Kit Hoover, Scott Evans and Sibley Scoles. All smiles and nice-ness with arms around each other.

That’s when the weirdness started. Plenty of online viewers noticed Shaq’s hand wrapped around host Kit Hoover’s waist. Plenty of “I can’t believe it” comments over Shaq’s size, compared to the others…and especially that big, NBA-sized hand. Some thought it was – to borrow a new term – “fake news.” Others thought – and commented – it looked like a photoshop job. 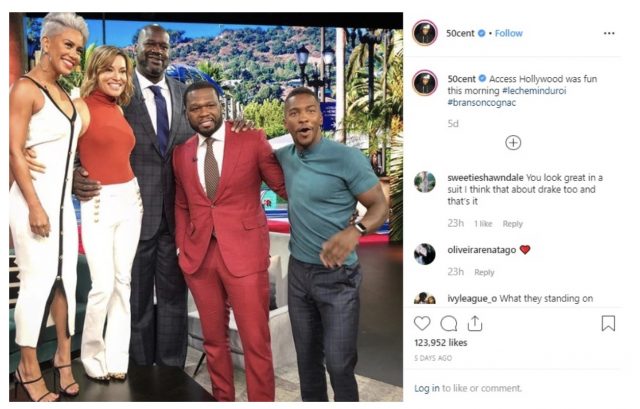 But no, your eyes (and computer / smartphone screens) were not playing tricks on you. That’s the real-sized Shaq, along with other normal-sized humans. Maybe TV people are just smaller average (wouldn’t surprise this reporter).

Cool comment number one: “Am I tripping or is @shaqs hand bigger than @50cent head?🤔🤨” someone asked.

Cool comment number two: “His nails be bigger than the buttons [on] her pants 😮 wowww!!” wrote someone else.

Cool comment number three: “@shaq hand is the size of that ladies stomach 😂😂,” another commented.

Others said it was hard to notice anything else in the photo besides the former hoop player’s hand, despite others being in the pic too.

50 also commented on O’Neal’s size but not his hand, just how tall he is in comparison. “I was feeling big till Shaq showed up,” wrote Fif in a separate picture of himself and the retired NBA superstar.

For the record, check that pic carefully. The two ladies are standing on a platform on the TV set, elevating them a bit compared to Shaq. With the altitude-adjustment, one of the ladies seems (in the pic, anyway) to be just as tall as O’Neal.

That led more than a few commenters to skip talking about Shaq and 50 Cent at all. Co-host Sibley Scoles got some attention, too. The word “fine” appeared more than a few times… Who’s the white haired one??????” someone asked.

previous
Shaq In Deal to Produce New TV Shows
next
Shaq Highest Rating Player of All Time! (In a Game…)