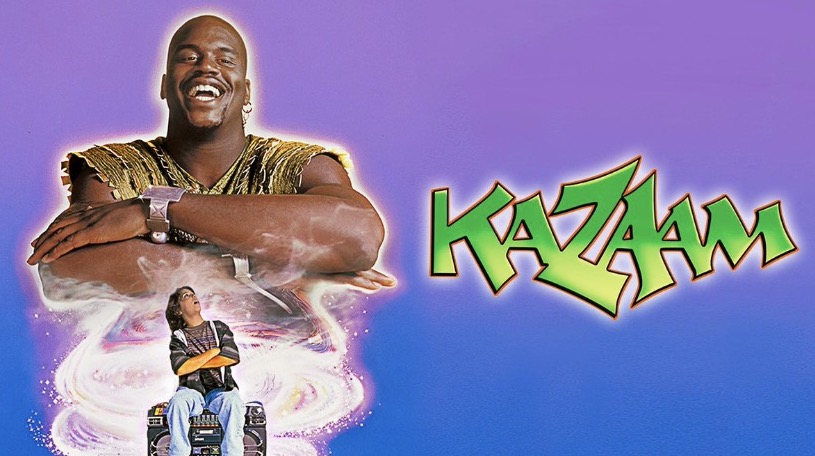 So, Shaquille O’Neal kinda, sorta helped \break the Internet this week. As you may or may not know the Disney company (yes, Mickey Mouse and lots more), rolled out it’s big online streaming service called Disney+ on November 12. Yes, Shaq was a part of that. Stay tuned to read the whole story

So when it comes to Disney+, there are hundreds of different big movie titles, TV shows, and lots of other content that was announced as part of the Disney+ service. You probably already knew that… it would be hard to miss the TV commercials in the past few weeks. What you may not have known is that a relatively old, relatively unknown Shaq movie was also included in the list of flicks that would be released when Disney+ went “live.“

Now, for those of you who really know your Shaq history… Especially “Shaq in the movies” history, you’ll know the Big Man starred in a movie called Kazaam. Kind of a genie movie, kind of a kids flick, kind of funny… A little bit of everything. Now, the movie did get – as they say in the business – “panned” by the critics. That means they didn’t exactly like it. It scored 6% Rotten on the Rotten Tomatoes website… That’s pretty rotten!

Still the movie is super-popular with lots of young kids and Shaq fans in general. And all those folks quickly went to Twitter and other social media outlets, to express their excitement. Honestly, a few of them freaked out over the movie being part of the streaming Disney+ channel.

Check the pictures of the tweets below… A few of our favorites: “Disney plus got Kazaam? All right, sold.”

Another one simply said: “Definitely worth the price of admission. Disney+ might be worth it for Kazan alone.”

And our personal fav here at ShaqFu Radio: “The most important announcement of our age is that Shaq, the rappin’ genie, is coming to Disney+.” 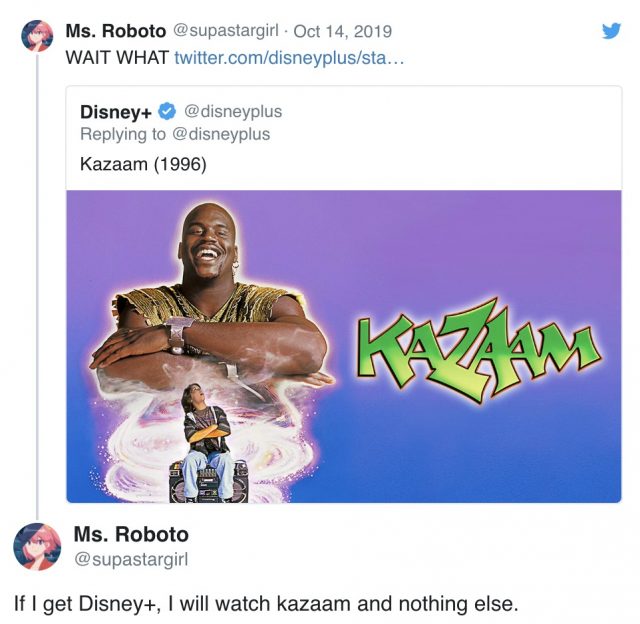 Now, whether you think Kazaam I am is indeed a cinematic masterpiece (or not), the Disney+ service is definitely a big deal. Early estimates are that about 10 million people went online and signed up for the service in its FIRST DAY of operation. In fact, so many signed up that some of them couldn’t even get to the service because the website was so busy. In a press release Disney said they were “pleasantly surprised“ by the amount of business they generated. Ya think?

We probably could’ve guessed things would get pretty busy. After all, for just a few dollars a month fans not only get to see Shaq in Kazaam… they get some other pretty cool movies. Like… all the Star Wars and all the Avengers movies… all in one place. Yeah, kind of a big deal!

Movie history for those who aren’t familiar with Kazaam: It’s basically a magical genie story. A young boy living in the hood, trying to stay clean and out of trouble. He finds (no, not a magic lamp!), but a magical old boombox. When he fires it up, Kazaam! Of course just like any other genie, Shaq / Kazaam has to grant the boy who freed him three wishes. Movie magic ensues…

Honestly, this reporter now feels like he’s got to go rent the movie or at least try downloading it somewhere so he can check it out for himself… No, it’s not great cinema, but definitely worth checking out as another part of Shaq-history. See you at the movies…