Two bits of food news to relate today…both featuring Shaq. One all about eating, the other all about cooking… stay tuned.

Good reviews from the Big Man… between bites, Shaq pronounced it “good.” Still, there was some curiosity over the makeup of the no-meat meal. “It ain’t meat? What is it?” O’Neal asks the person shooting the video of him eating. The answer he got back? “It’s love.”

No matter what it was made of, it proved to be a hit for Shaq, who made fast work of both burgers. Honestly, the burger is made by a company called Impossible Foods. Even fast-food chain Burger King is using the company’s products to make it’s so-called “Impossible Whopper.”

Shaq probably already knew what was going on with his vegan burger, as he’s no stranger to the no-meat food business. O’Neal is a big investor in a competing company called Beyond Meat, so we’re guessing he knows a bit about the industry. 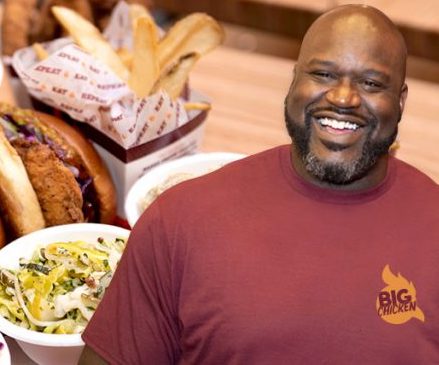 Meanwhile, on the the “cooking” portion of the post:

New Jersey news website NJ.com is reporting Shaq is going to be one of the hosts and cooks for a new show called “In the Kitchen with Shaq.” The show will be on one of those popular all-shopping networks, called ShopHQ.

The show is set to start – if all goes according to plan – in March 2020. A press release says Shaq will use the show to pitch his new line of cookware and accessories. Hey, if it works for George Foreman, it’ll work for Shaq, right?

As has been reported on several posts here on the ShaqFu Radio blog, O’Neal is already a big player in the food business. He’s on the board of directors for Papa John’s Pizza, and he owns nine of the company’s franchises in the Atlanta area. In addition, Shaq owns his own restaurant, called Big Chicken. There’s a Big Chicken in Los Angeles, and one aboard a Carnival Cruise Lines ship as well. (By the way, Shaq is a brand ambassador for Carnival as well…)

As for the new show, Shaq is going to make it a bit of a family affair. O’Neal’s mother, Lucille will be on the show, along with some other family friends. In a press release, Shaq said, “I’m so excited to partner with ShopHQ on ‘In the Kitchen with Shaq.’ Nothing brings people together like food and my new collection features top-of-the-line kitchen necessities that anyone can use to prep, cook and serve their favorite recipes. I can’t wait to unveil it on Shop HQ.”

Shaq Fu Radio @shaqfu_radio
5 days ago
Who says being stuck at home for quarantine is dull and boring? Check out the live show Shaq put on for his boys live in his kitchen! Check it out: https://t.co/x3DJVBAWSs https://t.co/UeRxOyOgz2
View on Twitter

0
0
Shaq Fu Radio @shaqfu_radio
6 days ago
On his podcast and other sources, Shaq talks about his connection to a bizarre story detailed on the Netflix docuseries "The Tiger King. Check it out: https://t.co/aVpsQ2hIfH https://t.co/4LenWnRLvd
View on Twitter

0
2
Shaq Fu Radio @shaqfu_radio
2 weeks ago
A popular NBA Instagrammer has released a new Top Ten of All Time list... Yes, Shaq is there. Where? Check out the new post and find out! https://t.co/ea40WyZK2c https://t.co/MQDnXltSbA
View on Twitter