Two bits of Shaq-news today, both from a cool interview with the Big Man on a recent episode of The Late Show with  Jimmy Fallon. One news-bit: music-related, the other, basketball.

If you haven’t seen it yet, Fallon has a very cool and funny segment called “The Random Instrument Challenge.” Fallon and his guests pick from a game show-like board that lists a mystery song (known only to the guest who picks it). Then the guest (or Fallon) picks another random card, which lists a musical instrument. The guest then tries to play the mystery song on the instrument that’s been picked. Now keep in mind that the guest (and Fallon, for that matter) have NO musical talent … at least as far as we know, right?

So here’s what that looked and sounded like. Pretty hilarious! Shout out to The Late Show with Jimmy Fallon for the video, courtesy of YouTube:

Meanwhile, Shaq and Fallon also had some fun with a Photoshopped picture that’s going around the interwebs these days. It shows a two-on-two game (can’t really call it a “pickup” game…) between Shaq and Kobe Bryant, playing current Lakers superstars Lebron James and Anthony Davis. Of course it’s all four in their primes, so yeah, the Photoshop thing was definitely needed to make it fair. 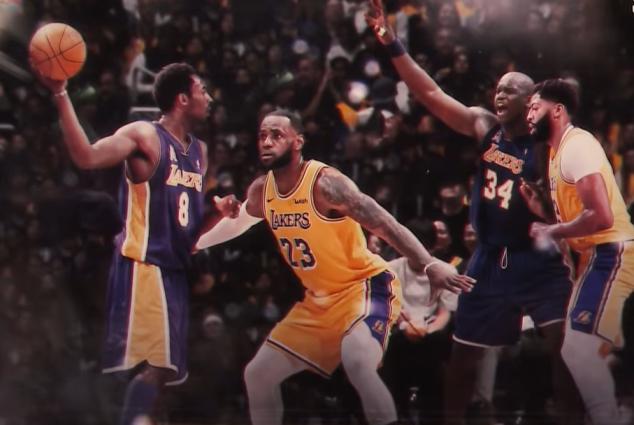 The question is, how would the duo of Shaq and Kobe fair against the King and A.D.? So Fallon asked exactly that question…and got the answer we all knew we’d get. Yet Shaq had an interesting take on it. When Fallon asked who did he “think” would win that little game, Shaq replied, “Do I think or do I know?” And then added that the answer was not just yes, he and Kobe would win, but “hell yes.”

O’Neal even admitted that in the real world, who would win that battle is an impossible question – at least until Doc Brown invents that whole time-travel thingy. Still, it’s fun to play with anyway. “I like having these conversations because of course they can never be answered,” he told Fallon. “But the answer is yes. Hell yes. Of course. Because there’s only one contributing factor: Who gonna guard me?”

previous
Shaq IS the Greek Freak (He Says...)
next
Shaq Does His Superman Thing in New York City