Sure, they famously clashed when they were teammates on the Los Angeles Lakers, but with the tragic death of Kobe Bryant this past weekend, then entire NBA – and especially former team member Shaquille O’Neal have been remembering Kobe…grieving his loss, and talking of fond memories of time on and off-court together.

Shaq was even traded from the Lakers in what some say was an effort to convince Kobe to stay in LA when he turned free agent. And over the years, the squabbles between Kobe and Shaq cooled. Kobe appeared on Shaq’s podcast back in 2015 (and a TNT television interview in 2018) to make nice, and Shaq attended Bryant’s final game in 2016. Bryant was on hand for the official unveiling of O’Neal’s statue in front of the Staples Center a year later. On several occasions, O’Neal referred to Bryant as the greatest Laker of all time. Shaq got was part of a special remembrance of Bryant on a special TNT pregame show Tuesday. O’Neal talked about losing not only Kobe, but also his sister, who passed recently. If you haven’t seen it yet, here it is:

On the video, Shaq talks about loss and the pain of grief: 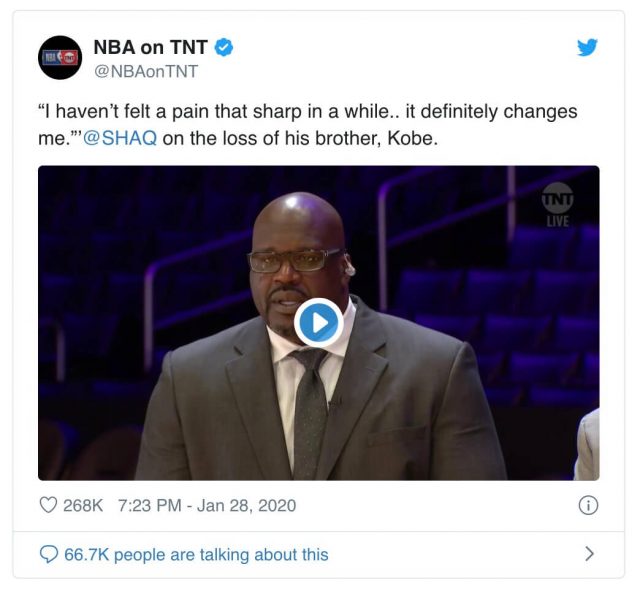 “Well, as you know, the last couple months has been really tough. I lost my little sister. I haven’t been sleeping. I haven’t been doing the normal things I usually do. I work, we laugh, we kid and we joke. When I get back home and look at reality and see she’s gone, it just hurts. So the other day, I’m downstairs working out with my son Shaqir and my nephew Columbus, and my other nephew comes in crying, and he shows me his phone, and I snapped at him. I said, ‘Man, get that out of my face.’ We live in a world where anything can be photoshopped, anything can be hoaxed. I didn’t want to believe it. And then I got the call from [Ernie Johnson], Charles [Barkley], Kenny [Smith] — everybody called me. And then we found out it was confirmed. I haven’t felt a pain that sharp in a while. [I’m] 47 years old. I lost two grandmothers. I lost a sarge, lost my sister, and now I lost a little brother.

Our names will be attached together for what we did. People always ask about our relationship, and I tell them it’s just like me and Charles. You got two strong-minded people that are going to get it done their way, that are going to say certain things. The respect will never be lost. When it comes to being inside the lines and winning, that’s what me him did.

Shareef called me devastated and said ‘Kobe just texted me to see how I was doing.’ He used to do that from time to time. You know, it just makes me think that in life, sometimes instead of holding back certain things, we should just do.

We up here, we work a lot, and I think a lot of times we take stuff for granted. Like, I don’t talk to you guys as much as I need to. The fact that we’re not gonna be able to joke during his Hall of Fame ceremony. We’re not gonna be able to say, ‘Ha, I got five and you got four.’ The fact that we we’re not gonna be able to say, ‘If we could have stayed together we would’ve got 10.’ Those are the things you can’t get back. With the loss of my father, my sister … that’s the only thing I wish — that I could say something to him. The last time I talked to him was when he was here [Staples Center] and I asked him to get 50 and he got 60. That’s the last time I spoke to him. I just wish I could have. It definitely changes me. Because I work a lot. You guys know what I do. I work probably more than the average guy. I just really now have to take time and call and say I love you. … I’m gonna try to do a better job of just reaching out and just talking to other people rather than always procrastinating because you never know.”

O’Neal was understandably an emotional wreck in talking about Bryant, and at one point struggled for words so much that Ernie Johnson nearly steered the conversation to the other panelists. But he regained his composure and tried to take a lesson from the experience. He described the realization of needing to speak to the people he cares about more, a sentiment that has been shared by just about everyone grieving Bryant in recent days.

After the segment, O’Neal led the crowd outside of the Staples Center in a boisterous “Kobe” chant. While few knew Bryant as well as O’Neal did, his loss can hopefully at least spur others into appreciating their lives and the people around them a little bit more. 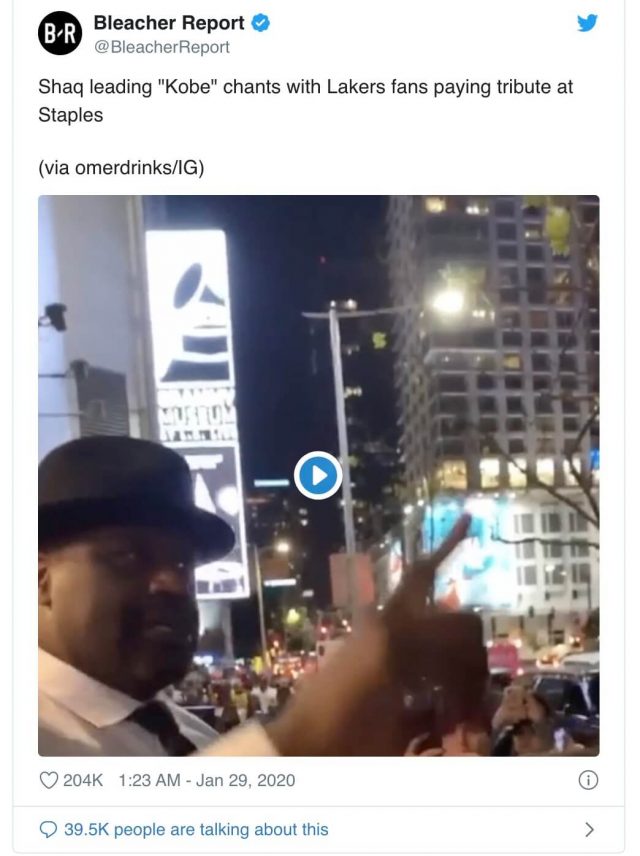 Shaq Fu Radio @shaqfu_radio
20 hours ago
Who says being stuck at home for quarantine is dull and boring? Check out the live show Shaq put on for his boys live in his kitchen! Check it out: https://t.co/x3DJVBAWSs https://t.co/UeRxOyOgz2
View on Twitter

0
0
Shaq Fu Radio @shaqfu_radio
23 hours ago
On his podcast and other sources, Shaq talks about his connection to a bizarre story detailed on the Netflix docuseries "The Tiger King. Check it out: https://t.co/aVpsQ2hIfH https://t.co/4LenWnRLvd
View on Twitter