More news today on the suspension of the NBA season, announced earlier this week as a safety precaution by the Association in response to the coronavirus outbreak nationwide.

The NBA suspended its regular season Wednesday after one – then two – members of the Utah Jazz tested positive for the virus. That led to shutting down the NBA and many other sporting events, as the magnitude of the decision reverberated around other pro and college sports leagues. At first, the NCAA announced it would play March Madness games with no fans in attendance. Then that decision was changed to simply calling off the huge annual college event. Other events like The Masters golf tournament have also been postponed without a future return date.

As of this writing (March 13), NBA Commissioner Adam Silver now says the current league suspension will last at least 30 days. A decision on how – and if – to resume the season will be made at that time, when more information is available on the spread of coronavirus.

Commissioner Silver appeared on a special edition of TNT’s “Inside the NBA” on Thursday and revealed that the league’s current suspension would last at least 30 days, and then – according to Silver – it may be possible the season could be resumed at that time. It’s still not clear if the remaining regular season games will be played, or if the league will simply go directly to the playoffs. It’s still too early to tell…

Silver: “Even if we’re out for a month, if we’re out for six weeks, we can still restart the season. It might mean the Finals take place in July or late July. Just my feeling was it was way premature to suggest we had lost the season.” Sports reporters have noted, however, that pushing the finish of the season back that far could start to make for some very challenging scheduling issues. For example, the Democratic National Convention is scheduled for mid-July in Milwaukee, in the same building that’s the home of the Milwaukee Bucks. If the Bucks are still in the playoffs…wow, what a problem! 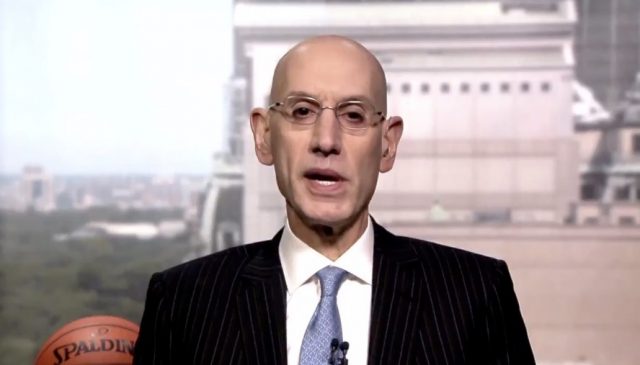 Along with the TV appearance, Silver has posted an open letter to fans, describing the situation in more detail.. He explained if games are indeed canceled, or played without fans present, teams will work with fans on either refunds or credits for future games.

On a related note, players and others are starting to do the math over games – and importantly, salaries – lost due to the suspension. The current CBA (collective bargaining agreement) between the league and players union says the league can  reduce every player’s salary by 1.08 percent for every canceled game. It’s important to note the difference between “suspended” and “cancelled” games, and that may be something for lawyers to work out later.

Either way, players like Lakers superstar LeBron James could lose hundreds of thousands, if not millions of dollars. Of course LeBron has other streams of income to help him through missed games. Other players, not so much. For example, there’s 25 year-old Mychal Mulder, who signed a contract to play just the final 18 games of the 2019-20 season. He could lose the entire contact and all potential salary.

Other teams may face some complicated, expensive math. The minimum teams were required to spend on player payroll this year is about $98 million. That would change so-called luxury taxes paid by teams over the salary cap. Teams such as the Charlotte Hornets and New Orleans Pelicans, who have never paid the luxury tax, could suddenly find themselves facing hefty and unexpected bills to make up the difference of what they were supposed to be spending on player salaries.

previous
NBA Suspends Remainder of Season
next
Messages and Help From Shaq, Other Players on Coronavirus