More and more juicy nuggets of info are coming to light from the late-1990’s NBA through ESPN’s great documentary series “The Last Dance” and related stories. The “Dance” series is all about the Chicago Bulls final big run for an NBA Championship, with coach Phil Jackson (he created that name) and Michael Jordan, Pippen, etc. on the floor.

Anyone who remembers Jackson from his coaching days (or has read his books or seen him speak since those days) well knows of his persona as a “zen master” of the game and the people in it. (Almost) always calm and collected, he always found new and interesting ways to motivate his team and to come up with unique playing strategies.

As for Jackson himself, he was a true student of the game and the stars who played. Recently, some new intel came out about how Jackson viewed superstar Shaquille O’Neal, along with some new insights into their player / coach relationship.

Seems that during the 1997-98 NBA season, the Bulls head coach maintained a diary for ESPN The Magazine. At the time, ESPN was documenting the season to turn it into the docuseries we now know as “The Last Dance.” ESPN writer Rick Telander noted, “Phil Jackson has been collecting his thoughts and analyzing the events surrounding what appears to be the final season of the Bulls’ 1990s run for The Magazine.” 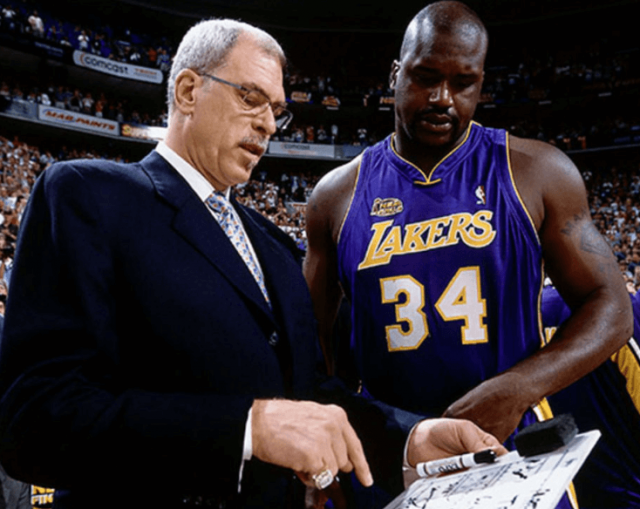 It’s only in the past few weeks that some of those diaries resurfaced. NBA writer and analyst Adam Howes posted two images that are apparently portions from Jackson’s diary. They reveal details of Jackon’s careful watching of players, their playing styles and tendencies. At one point, Jackson wrote about one of Shaq’s more – shall we say – heated moments.

It was an incident in which O’Neal was taken out of a game after committing a fourth foul against the Phoenix Suns. (A game, by the way, Jackson’s team had no connection to.) Jackson wrote: “(Shaq) got taken out of the game for committing his fourth foul- a brutish kind of foul- because he was angry.”

Jackson’s notes indicate Shaq didn’t understand why he couldn’t play the way he did and even argued about it with his coach. Coach Jackson’s notes showed him questioning if the up-and-coming superstar fully understood options and limitations for the way he played.

And while Jackson was sometimes critical of Shaq’s playing style, he was also very impressed by the Big Man’s talent, skills and of course, size. The coach wrote who he thought Shaq would be a perfect fit in his triangle offense. (The triangle offense is a strategy that is supposedly the most optimal way for all five players to space the floor on the court.)

Jackson saw in Shaq a skill-set he never had with any of his Bulls players. “Throw the ball to this guy (Shaq); what’s the defense going to do?” Jackson wrote. Maybe that’s one of the reasons Jackson would come to coach the Lakers in later years.

previous
Shaq: Spurs Should Only Have Four Rings
next
Shaq Pushed Lakers To Get Phil

Shaq Fu Radio @shaqfu_radio
6 days ago
It was the first night of work for the crew of TNT's Inside the NBA in four months... and Shaq got stuck in traffic! Late to work... and he heard about it! Check it out: https://t.co/Qmx6DGCdKp
View on Twitter
0
0
Shaq Fu Radio @shaqfu_radio
6 days ago
Celebrate! The NBA season returns for its second half tonight. Today, a story of Shaq "coaching up" one of the league's up-and-coming stars. Check it out: https://t.co/FDSRMDs2kd
View on Twitter
0
0
Shaq Fu Radio @shaqfu_radio
7 days ago
He's back...and the sharks are waiting. Shaq dives in for another appearance on the super-popular "Shark Week" series in Discovery Channel. Last time he was on, Shark Week history was made. Check it out: https://t.co/FPsJPiTmy5
View on Twitter
0
1