If you’re going out for the Fourth of July holiday, maybe to watch some fireworks, please remember to be careful, stay safe and stay “socially distant” out there. On the other hand, plenty of people will probably choose to stay home and snuggle up with a few good movies on whatever streaming TV service they happen to enjoy.

If you’re looking for a Shaq-fix, that can be had…if you have the right streaming service. Kazaam – the Shaq-plays-giant-sized-genie movie, is available on Disney+. A bit tip o’ the hat to our friends at movie website www.ScreenRant.com for a quick recap of things you never knew about Kazaam. Let’s dig in, shall we?

The Kazaam soundtrack was pretty well star-studded, too. With a quick trip over to Disney+, you’ll find that the music for this film seems to be intact. In addition to a meaningful film score from Christopher Tyng, this movie is full of popular music. Soundtracks were already a thing by 1996, and this one is chock-full of goodies. Of course there’s Shaq, and also Jason Weaver, the Backstreet Boys, Usher, and other popular artists of the day. 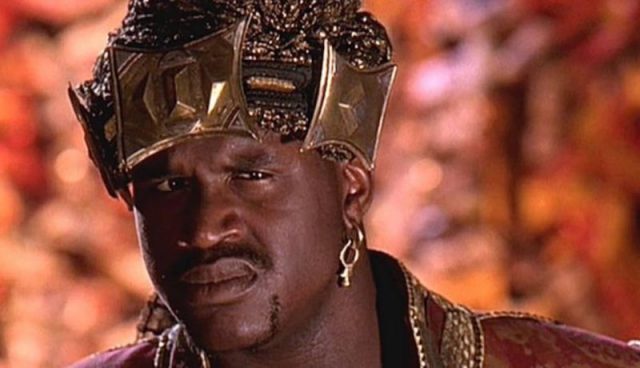 So maybe you’ll be adding Kazaam to your weekend movie list? For those who can’t get enough of the Big Man on the small screen, this might just be a holiday weekend snack worth adding to the playlist.

previous
Shaq Talks to Al Roker On Police Reform, NBA Return
next
Shaq Career Earnings - On Court and Off