The NBA Playoffs continue from inside “The Bubble” in Orlando. There’s a LOT going on, with multiple games from a couple of venues each day. This week has seen the LA Lakers even up their series with the Portland Trail Blazers at one game each. Another exciting game and big upset was a win by the Dallas Mavericks over the other Los Angeles team – the Clippers – Wednesday night, tying that series at 1-1.

In that game, Mavs big man Boban Marjanovic played a short ten minutes, but it was a good, strong appearance. Boban even scored the post-game interview (long-distance, of course) with another superstar big man, Shaquille O’Neal, along with the rest of the TNT Inside the NBA crew.

It started off interesting enough, with Boban admitting right from the get-go that he was nervous about talking to Shaq. See the full interview here: https://clutchpoints.com/nba-video-nervous-boban-marjanovic-gives-hilarious-interview-with-shaquille-oneal-after-mavs-clippers/  Thanks to our friends at ClutchPoints for the curation of the video.

Saying he was nervous about talking to the TNT crew may or may not have been totally honest and not a little bit of a joke. Boban is known for his almost constant commentary on the game, either from the sidelines, or even while he’s playing. 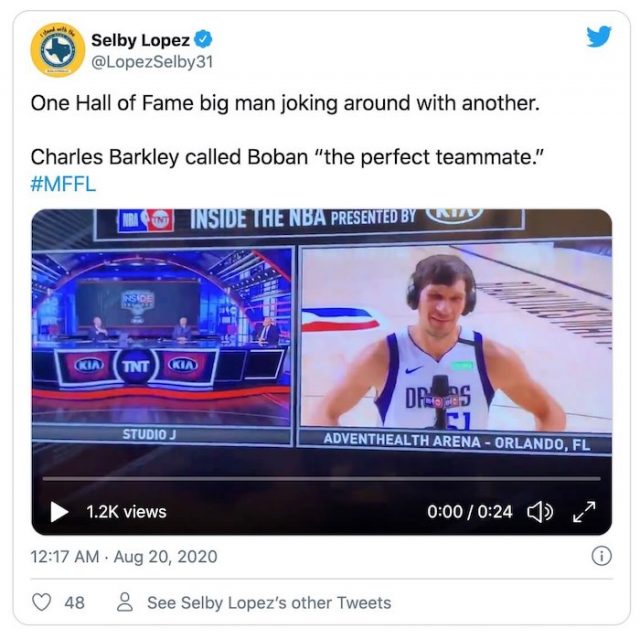 Here’s another great video of a “mic’d up” Boban. Check it out: https://sports.yahoo.com/boban-marjanovics-fun-personality-shines-with-shaquille-o-neal-inside-the-nba-crew-171551526.html  This one asks “Why can’t we have Boban mic’d up every night?” That would be cool. 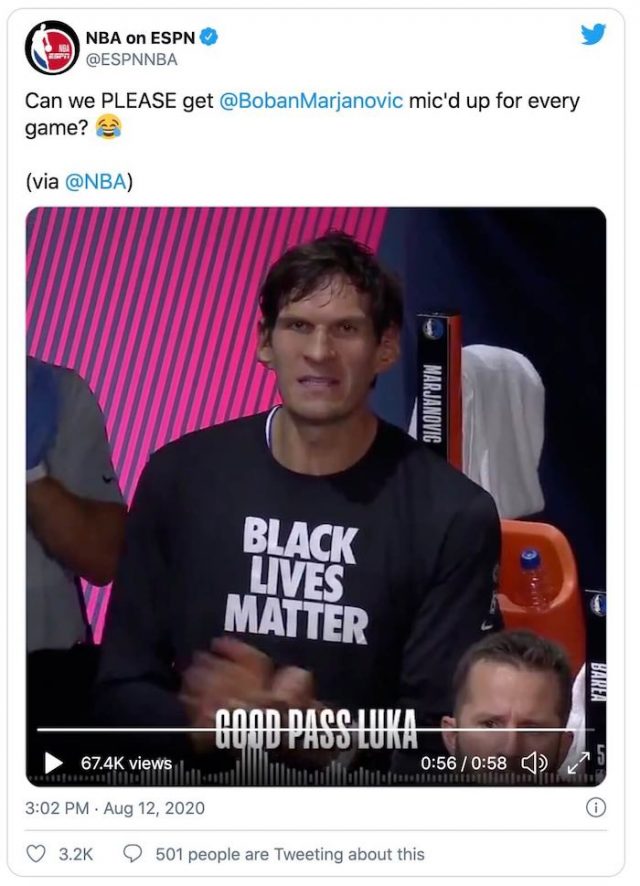 With that booming voice and cool Eastern European accent, Marjanovic chatted with Shad and the others. At 7-foot-4, he’s got an inch or two on O’Neal. Amazing. For the night, Boban played just those ten minutes, but had a good showing: 13 points on 6-of-8 shooting, along with nine rebounds and an assist.

For his part, Shaq could not let this interview end without asking Boban to pull out the “You rang” line, which is a reference to a popular Frankenstein meme.

Boban is by no means a star player for the Mavs, but his contributions to the team is invaluable. Hall of Famer Charles Barkley hit the nail on the head when he labeled Boban as “the perfect teammate.”

The series continues this week, and the Mavs are by no means in the drivers’ seat. The Clippers are the second seed in the West, behind the other LA team. Still, Boban and the Mavs are not just going to roll over, and watching Marjanovic and teammates play with urgency and fun is definitely a good watch.

previous
Shaq Warns Lakers About Portland - For Good Reason!
next
Shaq and Others Mark Kobe's Birthday