Another police-involved shooting of a Black man – this time in Kenosha, Wisconsin – has led to the NBA playoffs being shut down for at least two days. In the wake of the move by NBA players, many other professional athletes and teams also put their games on pause. Included on the list: the WNBA, Major League Baseball, the National Hockey League and others.

Jacob Blake, a Black man, was shot seven times by police last Sunday. Blake was shot as he attempted to enter the driver’s side door of his vehicle with three of his children inside. The kids were witnesses to the shooting, as were bystanders who captured the moment on video. That footage has been widely distributed on social media.

What quickly followed: The Milwaukee Bucks – the team closest to the incident – decided to not take the floor Wednesday night for their playoff game against the Orlando Magic from inside the NBA “bubble” in Orlando. Other teams quickly voted to follow, which led to a cancellation / postponement of all scheduled NBA action that night, and the following night as well.

Baseball, hockey and the WNBA quickly followed. As of this writing on Friday August 28th, it’s not clear if games will resume tonight or tomorrow. NBA players have held a series of meetings with team owners and league officials in the past two days.

As for other sports, baseball games are scheduled for today (Friday) but that could change at the last minute. In the NHL, hockey playoffs are scheduled to return to the ice tomorrow (Saturday). 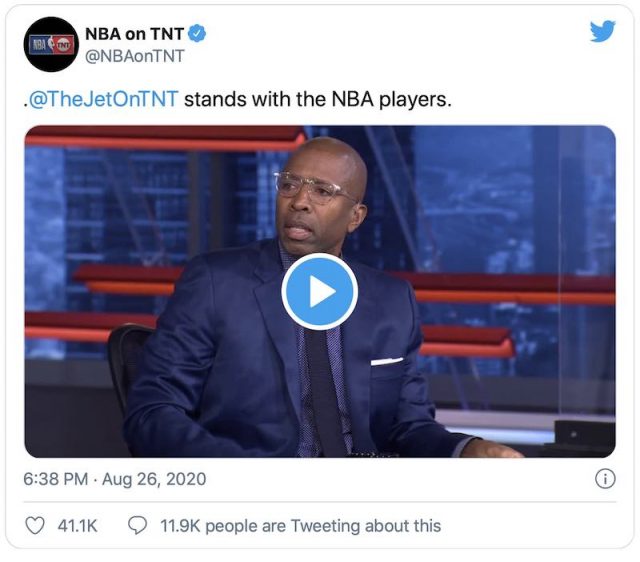 As for the NBA, its players and those connected to the game, it’s been 48 hours of soul-searching, speaking out, and action. One of the biggest moments came for Shaq and the crew of TNT’s “Inside the NBA” program, which was on the air Wednesday Amid the uncertainty of what was going to happen as the story unfolded.

Just as the broadcast went on the air, commentator and reporter Kenny Smith took off his microphone and walked off the set as a show of solidarity with the NBA players and their no-game protest.

Along with Smith, Charles Barkley and Shaq serve as analysts. Ernie Johnson is the main host. Shaq, Barkley and Johnson continued the program, even though they didn’t have any games to talk about.

Smith said he had trouble finding the right words to succinctly put how he and the players are feeling following Sunday’s shooting.

“This is tough. I mean right now my head is ready to explode,” Smith said. “Like just in the thoughts of what’s going on. I don’t even know if I am even appropriate enough to say it, what the players are feeling and how they are feeling. I haven’t talked to any of the players. Coming in and even driving here, getting into the studio, hearing calls and people talking …

“And for me, I think the biggest thing now as a Black man, as a former player, I think it’s best for me to support the players and just not be here tonight.”

Smith then unplugged his microphone and proceeded to walk off the set. Host Ernie Johnson told Smith he respected his decision to leave. Click here to see the full video on Twitter.

As Smith left the set, he said he will “figure out what happens” later.