As the long, strange trip of this years’ NBA season is coming to its final chapter, one more sports media outlet is out with one more Top 10 list. This one is from Fox Sports and News, and it’s a simple Top 10 players of all time. No huge surprises as to who made the list (spoiler alert: Shaq is here), but the devil is in the details, as they say, so the order is what made for the “interesting” bit of this story’s headline.

Top Ten (or pick whatever number you like) are always a bit tricky. Top what? Scorer? Defensive player? Teammate? Duo? There are a ton of possible combinations, and the lists they produce are always different, and great fodder for discussion and argument over an adult beverage. Greatest-of-all-time (GOAT) might be a little easier. At least the subject is a little easier (is it?) to define.

Fox Sports News gave his two pennies on this matter delivering their own Top 10 NBA players list and as usual, it was controversial. Our thanks for www.Fadeawayworld.com for digging up this story. It was the writers on that site that pointed out some of the oddities of the list. See the quote below.

OK, no surprise. Michael Jordan at Number One. Next: LeBron James at Number Two. LeBron is still working on his legacy, of course. At the time of this writing, his Los Angeles Lakers are still in the thick of the bubble-centered NBA playoffs. 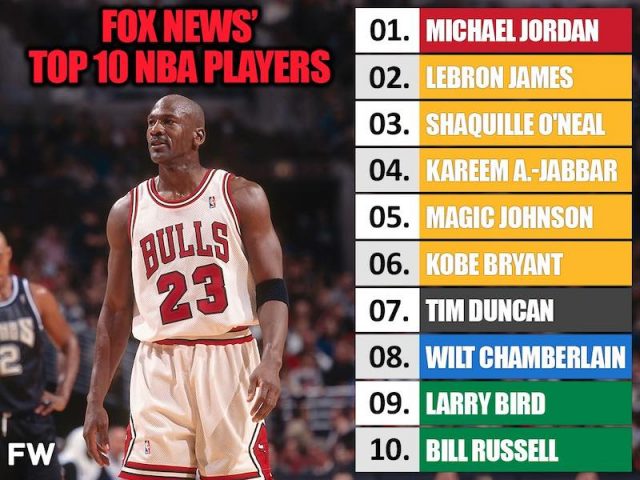 As we spoiler-alerted, Shaq is on the list. In fact, Fox Sports puts him at #3 on the list. Surprised? Gotta say, we were here in the luxurious offices of the ShaqFu Radio blog. How could that be? Rather than try to sort it out, here’s Fox’s thinking, directly from their list and explanation:

“O’Neal’s pure dominance was the reason why the NBA was forced to change its rules. First, when O’Neal was a member of the Orlando Magic in 1993, he made a put-back dunk that was so strong, that it basically broke the backboard, and the goal ended up folding and lowering to the floor. This caused the NBA to have a backup hoop in every arena.

Prior to the 2001-02 NBA season, the league eliminated its illegal defense rules. That allowed teams to use zone defenses, with the only restriction being that no player could stay in the paint for more than three seconds unless he was guarding someone. This made the lane more crowded, and not only did O’Neal have to beat his own man, but he had to overcome the other two or three players that were in defensive help positions. For years, the NBA forced players to either guard their man or double the man with the ball. Any player caught guarding an area and not a man would elicit a technical foul shot.

In the ’90s, coaches developed strategies to abuse the man-to-man. Teams would isolate their best scorer in the post with his teammates as far away on the other side of the court as possible, to make it hard to double. It was no coincidence that the rule change came during O’Neal’s prime.”

We have to agree with some – if not all – of that thinking. Shaq’s play made the NBA change the rules of the game! You gotta admit, that’s a pretty big deal. Still, if you look at the overall impact of the player on the game in total, you might (as Fadeawaysports did), put Wilt Chamberlain and Bill Russell at the very top of the list, tied for Number One.

Again, from Fadeawayworld. They point out Fox putting Kobe Bryant in the 6th overall slot. Greater basketball minds than ShaqFu Radio and Fadeawayworld have consistently put Kobe in the top five all-time. After all, even after Shaq left the Lakers, Kobe went to win two more titles.

previous
Nash and Shaq Spar on MVP Trophies
next
Jamal Murray calls out Shaq, Barkley after Nuggets’ upset of Clippers