In the midst of the NBA playoff season from “the bubble” in Orlando, the NBA announced its 2020 Most Valuable Player. The award went to Milwaukee Bucks star and “Greek Freak” Giannis Antetokounmpo. As expected, the analysis and controversy over the pick began right on schedule.

From the studios of Inside the NBA on TNT, commentator and hoops legend Shaquille O’Neal let it be known he didn’t like the pick. On the show with Shaq and the rest of the crew that night was Golden State Warriors power forward Draymond Green. He liked the selection of Giannis as MVP, and the two had some “interesting” discussion about the choice.

For the record, Shaq would have rather the NBA selected someone from his former team, the Los Angeles Lakers. Guess who? Of course – LeBron James. Shaq is of the opinion that King James made a better case for being the best player in the league yet again this year.

Here at ShaqFu Radio, we’re still trying to figure out what Green meant with his comments. He acknowledged that James is the top player in the league, he said Milwaukee Bucks star Giannis Antetokounmpo had a better 2019-20 season than LeBron. We’re wondering…isn’t that kind of the same thing? 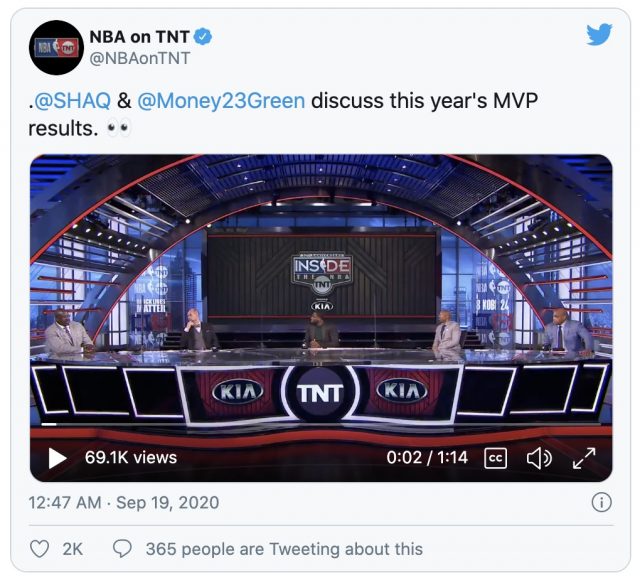 For Giannis Antetokounmpo, this marks his second-straight MVP Award. That didn’t go over very well with LeBron, who told reporters he was not happy with the NBA voting system. In this year’s balloting James got only 16 first-place votes. Remember, this is a guy who is a four-time MVP winner…and is currently leading his Lakers on a postseason run that’s just a few games away from the Finals.

Green put it this way: Everyone knows LeBron is the best player in the league. However, Antetokounmpo was more “valuable” to his team than James. After all, Lakers big man Anthony Davis led L.A. in 13 different statistical categories during the regular season and made the All-NBA First Team alongside James.

Again, Green’s view: If you take Giannis off the Bucks, they wouldn’t even come close to being the best team in the NBA. Meanwhile, if you take LeBron off the Lakers, Los Angeles wouldn’t register the top record in the West, but would still be really good with Davis leading the way.

As for us here at ShaqFu Radio, we agree. Without Giannis, the Bucks would definitely be an also-ran team. But (and it’s a big but!)… being the one superstar on your team and no doubt being the driving force in getting the team to the playoffs…that’s no reason to make you Most Valuable Player (again, that’s our opinion…your mileage may differ).

While the MVP trophy is a nice addition to any players’ person Hall of Fame, it’s the Championships that count. We’re expecting to see LeBron will crank it up to 11 now that he’s been denied the MVP award, and the Lakers are still playing for the biggest prize the league has to offer: NBA Champions.