As of this writing, the NBA Championship Finals tip off tonight! What a long, strange trip it’s been to get here. All teams and games in “the bubble” in Orlando, Florida. Fans watching the game – and us home viewers watching those fans – brought in via the internet and big video screens in the arena. A few family members on the scene “live”… often with kids in tow.

Now it’s all down to the Finals…crowning a Champion in the on-again, off-again, on-again season. Who’s ever going to forget Mark Cuban’s face the night way back in the spring when his smartphone told him the season was being shut down?

Now it’s time… the Los Angeles Lakers face the Miami Heat. As for our friend Sahq, there’s no question he’s all-in for the Lakers. Yet he did play for both teams, and in a pre-Finals tweet, had nothing but praise for the job being done by Heat head coach Eric Spoelstra.

“Coach Spo” as he’s called has taken the Heat to the NBA Finals five times in 11 years. In regular season play, he’s racked up eight seasons over .500. And he’s done it with wildly different rosters and playing styles.

Spoelstra has had his share of superstars, including Shaq. He’s also had (and lost) LeBron James and Chris Bosh. He had Dwayne Wade for a lot of years, but the winning didn’t end when D-Wade’s career came to a close.

In fact, there may have been some time when Spoelstra clashed with King James. LeBron allegedly called for Spoelestra’s firing, but Heat GM Pat Riley stood by his side and always trusted him at the helm. Obviously, that trust paid off.

A tip o’ the hat to our friends at FadeawayWorld.com for details on Coach Spo’s inspiring story. Even though he popped up quickly in the NBA universe, he’d been working – mostly behind the scenes – in the Heat organization for years.

The young Spoelstra started with the Heat as the team’s video coordinator in 1995. Two years later he was an Assistant Coach. His career detoured a bit into scouting, but then he was named Head Coach of the Heat in 2008. In 2012 he and the Heat won the NBA Championship, and they repeated the year after. Nice resume!

One of Coach Spo’s former players – Shaquille O’Neal – took it to his Instagram account to give him a shoutout for the outstanding job he’s doing. 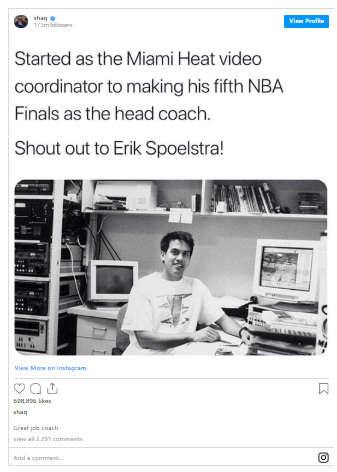 Erik Spoelstra has proven to be one of the best coaches in NBA history. Seems that his players are all-in with their coach’s strong defensive schemes and overall “grinder” mentality. Spo has been a contender for years, regardless of the chess pieces he’s got to put on the board.

We agree with FadeawayWorld’s bottom line: Pat Riley and Erik Spoelstra have done an incredible job at building a winning culture at South Beach for the Heat. The team and it’s brain trust point to the fact that you don’t need to tank to get great players in next years’ draft, nor stop competing to rebuild.

previous
Shaq Streak Stays Alive...
next
Look! Up in the Stands!