NOTE: As of this writing, the NBA Finals are 2-1 for the Los Angeles Lakers over the Miami Heat. The series continues this week, and now that the Heat are finding some horsepower, the series should be a good one.

If you’ve been watching the series and saw Game 2, you saw an interesting moment. LeBron James and Anthony Davis had some heated words between each other over a blown defensive assignment. Trouble on the Lakers? No way, according to a story and analysis on the pages of USA TODAY Sports. Tip o’ the hat to USA TODAY for the original reporting.

In that second game the Lakers ended up coasting to a 124-114 win over the Heat. As for the exchange between LeBron and A.D., seems the Lakers superstars are not afraid to hold each other accountable.

After the game, Anthony Davis talked to reporters. “We were both frustrated that we had multiple coverages that were blown tonight. It was just all piling up and we just kind of had that moment, put it behind us and kept playing,” Davis said. “It’s not always going to be pretty. It always seems like everything is good with me and him, and we do have our times where we do yell at each other and we do argue, but we know it’s coming from a good place, so we get over it quickly and move on to the next play. We are just two guys that really want to win and have a love for the game.” 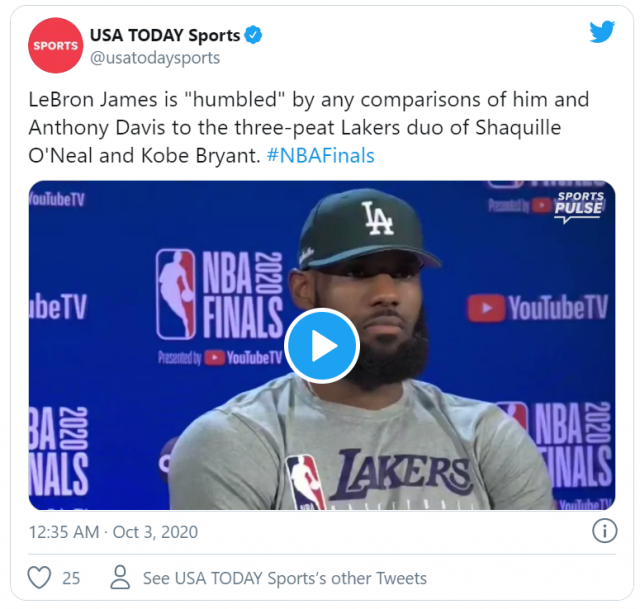 So… no worries between the pair, right? So it seems…and the numbers are showing some history-making stats, with an historic connection to our man Shaq. With 33 points, nine assists and nine rebounds… and Davis with 32 points and 14 rebounds, became the first Lakers teammates to score at least 30 points each in a Finals game since Kobe Bryant and Shaquille O’Neal dominated in a Game 3 win over the New Jersey Nets in 2002.

In being told of the history-making numbers, Davis described Bryant and O’Neal as “the best duo we’ve seen.” After all, the pair did win three NBA championships in four Finals appearances.

James had similar thoughts, saying Kobe and Shaq were “the most dominant duo that I have personally seen in my life.”

Davis talked about the way Shaq and Kobe sometimes had heated words between them: “They were arguing because they both wanted to be so dominant, they both wanted to be great and they both wanted to win,” Davis said. “That’s why they gelled together outside of everything else that you might have heard that they were going through. But you know, those two guys were selfless. They both had a competitive spirit with themselves to will their teams to win. I think me and Bron are the same way.”

James – never at a loss for words – was a bit caught up in the moment. “I can’t even believe I’m up here talking about myself and AD with Kobe and Shaq. (It’s) very humbling, because I know I grew up watching those guys,” James said. “I grew up admiring Kobe; obviously, a kid coming straight out of high school. Admired that as a kid when I was young, and obviously got the opportunity. And the force that Shaq played with. It’s very humbling that we can be even mentioned with those greats.”

Bryant won three of his five titles with O’Neal. O’Neal won three out of his four titles with Bryant. Time will tell how many rings LeBron and AD can help each other achieve.

previous
Look! Up in the Stands!
next
Shaq Wants Kids Back to Sports