Two developments in the O’Neal family this week. Seems Shaq can’t get enough of Houston, a place he’s visited a lot lately. Shaq was spotted at a local eatery called The Union Kitchen Memorial.

Meanwhile, O’Neal’s son Shareef is sporting a new tattoo of family friend and mentor Kobe Bryant. Along with Shaq’s appearances at the American Express online small business conference, it’s been a busy week for Shaq and son!

Maybe Shaq is looking for more ideas to expand his investments in the restaurant niche. The big man already owns a couple of his own restaurants called Big Chicken (there’s one on board a Carnival Cruise Lines ship as well), and he owns several Papa John’s Pizza franchises in the Atlanta area.

Earlier this week, O’Neal visited owners and staff – and had  a meal – at the restaurant owned by Houston group Gr8 Plate Hospitality. Back in July, Shaq visited another outlet from the same company, the Jax Grill, also in Houston

Union Kitchen is big on Southern and global dishes, and O’Neal used the visit for a new-school dinner of fried chicken with mashed potatoes and green beans. Don’t get too hungry when you check out the picture below. 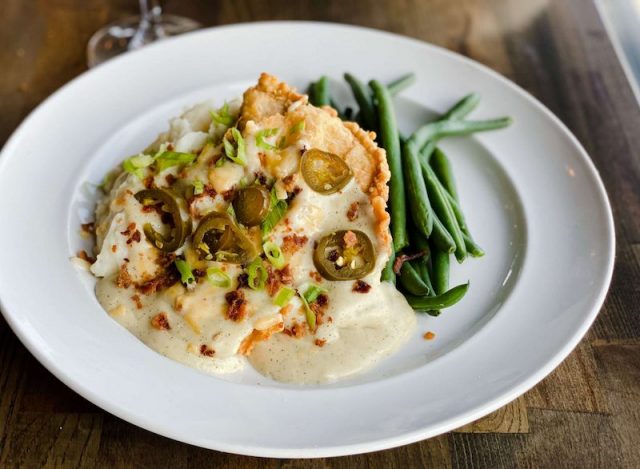 Shaq spent time in the restaurant with a couple of friends, including Houston senior police officer Kenneth Miles. They spent some time chatting with Gr8 Plate Hospitality owner Paul Miller.

Restaurant owner Miller: “We spoke a little about business, but he lit up like a Christmas tree when we were talking about kids. His kids, my kids and all the work he does with kids.”

O’Neal’s foundation works with underserved youth to “help them achieve their full potential,” according to the nonprofit’s website.

Meanwhile, Shaq’s son Shareef O’Neal just got another tattoo in honor of the late and great Kobe Bryant. According to celebrity TV show the new ink is a popular image of Bryant celebrating while tugging his legendary  #24 jersey.

It was Shareef who got the final text message from Kobe on the morning of the helicopter accident that claimed his and his daughter’s lives, along with several others. Bryant had been a mentor Shareef, both on and off the court.

The younger O’Neal has dedicated his fledgling basketball career to the five-time NBA champion. Like Shareef, many fans and fellow ballers have made efforts to honor Kobe. Current Lakers stars LeBron James and Anthony Davis got Kobe Bryant-related tattoos just days after the tragic accident. The entire Purple and Gold organization, too, dedicated its 2020 title win to the Black Mamba.

previous
Businessman Shaq is Back in Action...Again
next
Notes from the Latest Big Podcast With Shaq