If you’re gonna make a best-ever list for your profession, it’s a really nice perk to be able to include yourself on the list, right? Well, guess who just did exactly that?

In an Instagram post over the weekend, Shaq posted what he called his “unbeatable” team. Take a quick look at the post with the lineup (Photoshopped for sure!) below. Yeah, I’d say pretty unbeatable. Along with the Big Man himself on the starting five, the rest of the team is as follows: LeBron James, Michael Jordan, Kobe Bryant and Allen Iverson. His bottom-line declaration: “I don’t care what none of y’all saying. Ain’t nobody beatin’ this team in a seven games series.” Here at the ShaqFu Radio blog, we’re wondering if anybody beats this team EVER… 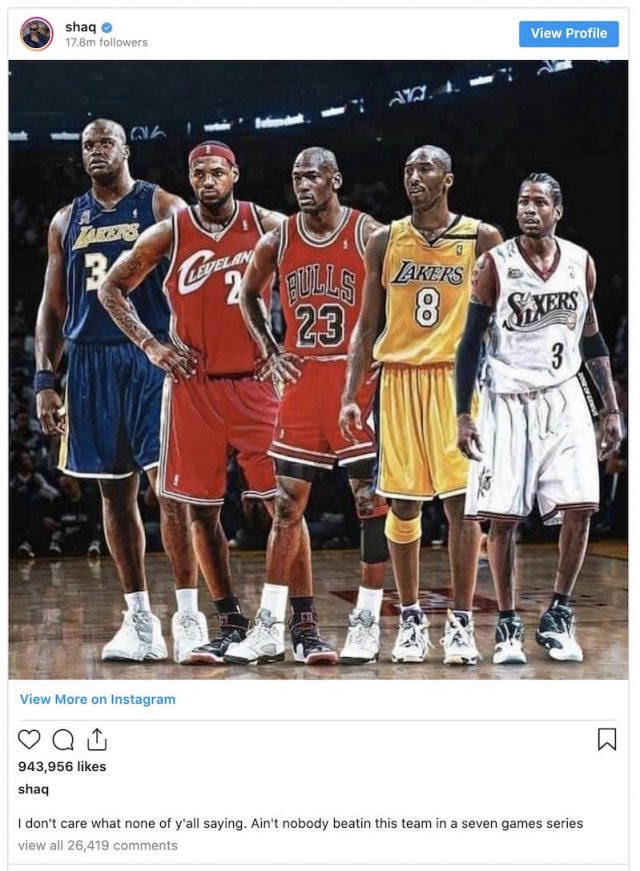 One online post put it this way: From offense to defense to playmaking, there is hardly any flaw in this team. Unfortunately, the world won’t ever see this team being assembled due to them playing in different eras.

Dwyane Wade was quick to chime in. Reposting the team on his own social media outlets, the former Miami Heat star wrote, “My Top 5 players of all time. My starting lineup vs anybodies!” (Yeah, that’s how he wrote it…)

D-wade of course played with O’Neal after the breakup of Shaq and Kobe Bryant on the Lakers. In Wade, Shaq found another brother-from-another-mother, and a teammate who made everyone better. The duo instantly clicked and even won an NBA Championship together for the Heat.

How about that starting five, anyway? Here’s just a few quick stats for the group: An even dozen (that’s 12!) MVP trophies, 15 Finals MVPs and over 50 All-NBA First Team selections. Not bad, eh?

Sports / basketball site TheSpun.com put together a quick analysis of Shaq’s starting five. Thanks to them for the assist.

Even though he never won a ring, Iverson is a true all-time great. Probably the best to never win a Championship. As a point guard, he averaged 30+ in three of his NBA seasons, including in 2001 when he won the league MVP trophy.

Shooting guard/small forward: How amazing would it have been to have MJ and Kobe on the floor together? Two all-time elite isolation scorers on the wings would be unstoppable in and of itself. With so much talent on the floor, the Mamba and Jordan would have a field day on defenders who were forced to play them one-on-one. With 11 total rings between these two, Shaq definitely wouldn’t have to be worried about their winning mentality.

Power forward: C’mon man… is there anybody better at this position than LeBron? With his big-time talent in hitting outside shots AND stellar defensive skills, the King would be a perfect complement for Shaq in high-low situations.

Speaking of O’Neal – he’s arguably the most physically dominant player the NBA has ever seen, a monster in any era against any competition. With opposing bigs being forced to double out on the wings, Shaq would absolutely punish late help defense rotations at the rim.

How about you? Who, if anyone, would you sub for on this team?