When we all get back to some sort of normal in our lives, we may someday get the chance to see an NBA game live and in-person. Won’t that be great! In the meantime, this crazy season is over, and now the off-season work begins. In Los Angeles, the  Lakers organization is planning a statue of Kobe Bryant outside Staples Center. Former teammate Shaquille O’Neal has some suggestions…

Shaq and Kobe were the championship-winning dynamic duo of the late 1990’s and early 2000’s for the Lakers. Even though they had a falling out, and Shaq left the City of Angels, they later patched things up and were great friends (along with their families) at the time of Kobe’s tragic death in a helicopter accident earlier this year.

Now plans are in the works for a Kobe statue outside of his former home court, Staples Center in downtown LA…no unlike the Michael Jordan bronze outside United Arena in Chicago.

If you haven’t seen it (Really? What hoops fan hasn’t?) … the MJ statue is a scene of one of his trademarked flying jump-and-dunk shots over some cowering foe. In Los Angeles, the discussion is over what image of Kobe will work best for a memorial. Like we said, Shaq already has his pick.

Recently, on the podcast “Text Message Talk Show with Dorrell Wright,” Shaq says he likes the moment of Kobe’s game-winning pull-up jumper against the Phoenix Suns in the first round of the 2006 NBA Playoffs.

NBA history fans – and anyone with a YouTube account – has seen the shot. As for Shaq, he was with the Heat at the time, so he was probably watching it on TV like the rest of us (if you were around back then… maybe we’re dating ourselves here at ShaqFu Radio…) That little bit of grainy video shows on one hand the amazing highs of a team making a buzzer-beater shot for the win, and the absolute lows of the team whose hopes have just been crushed. Total classic.

Whether you’re a Lakers fan or not, you’ve seen Kobe’s game-winner in highlight reels numerous times. It is, without a doubt, one of the greatest buzzer-beaters in NBA history. What made it even more special was that it happened right in front of the Lakers faithful.

That year with Shaq already on the east coast, Kobe carried that undermanned Lakers squad pretty much season-long, The team included guys like Lamar Odom, Smush Parker, Chris Mihm, Kwame Brown, and Brian Cook as his supporters. Still, they got the seventh seed in the NBA Playoffs and took the second seed Suns to a full seven-game series.

Kobe and company even went up 3-1 before blowing their lead in that series against the Suns. Still, in a super-interesting turn of history, the NBA Finals that year featured none other than Shaq and the Miami Heat beating the Dallas Mavericks. Wow…

The Shaquille O’Neal and Kobe Bryant duo will forever be one of the greatest tandems in NBA history and it would be great to see them sharing an honor once again. 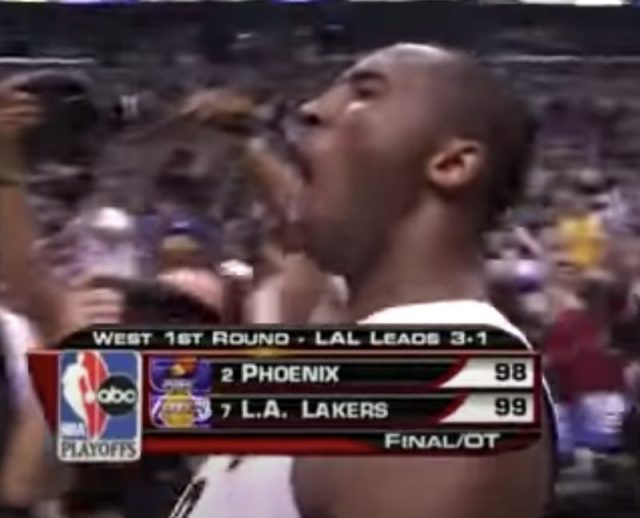 To young to have seen the video? Here it is:  https://youtu.be/rMs8bnQTE9A