The next chapter in the basketball career of Shareef O’Neal has begun. After receiving a much-needed waiver to get into the game this season, Shareef played his first game with the LSU Tigers last night (Thanksgiving night, as this is written). In addition, the younger O’Neal made a little bit of news with his choice of jersey number.

Some very interesting and cool math ended up with Shareef choosing number 32 for his jersey. As his Instagram image shows below, that came from adding 8 plus 24, which were the two numbers his friend and mentor Kobe Bryant wore during his time on court with the L.A. Lakers. And oh by the way, 32 was also Shaq’s number when he played with the Orlando Magic, his first team after his college career at LSU. Nice, eh?

Shareef and his sister are both at LSU now, both playing hoops. His move to LSU was definitely a nod to his father’s time there, and now the jersey number adds yet another bit of family history to the story. 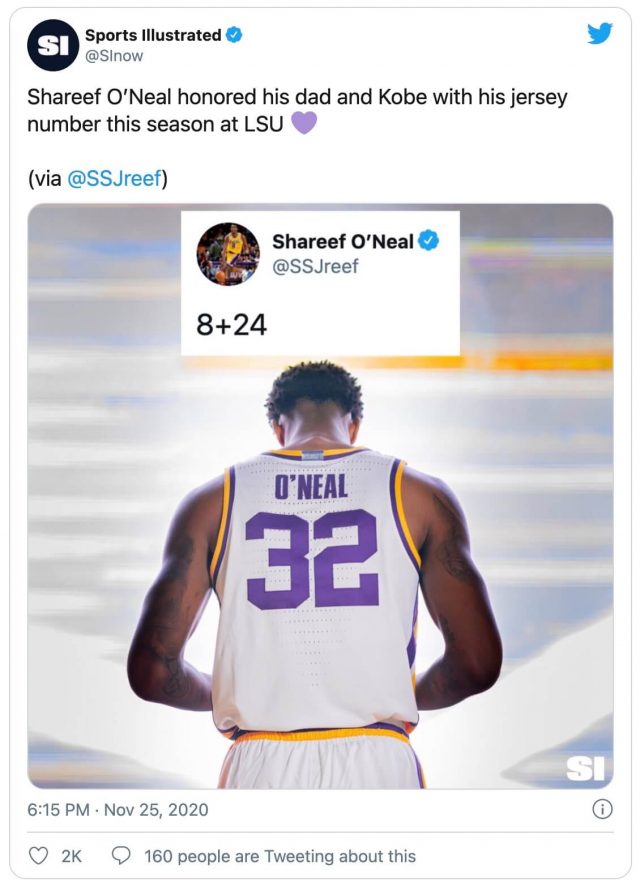 As for Shaq, he posted what can only be termed legendary numbers with the Tigers – powerful enough to make him the number one draft pick in the 1992 NBA Draft (snapped up without a second thought by the Magic.) The stint in Orlando was nice, but the move to LA made him the superstar he would go on to become.

Shareef O’Neal did spend two seasons with the UCLA Bruins, even though one season was pretty much a complete write-off due to a congenital heart condition. Off season surgery and rehab successfully handled that challenge. From there, Shareef signed on with Louisiana State University, his fathers alma mater.

After clearing waivers last week, Shareef and the Tigers opened their new season with a game against the SIU Edwardsville Cougars on Thanksgiving night. For the first game as a Tiger, O’Neal played 13 minutes, scored 3 points, had 5 rebounds and no assists.

Scouting reports list the six foot ten O’Neal as a “capable scorer that provides strong finishes at the rim largely due to his athleticism”… no doubt much like his father, yes?

With his split college career – some at UCLA and the rest at LSU, O’Neal has some work to do if he’s to make the jump to the NBA…which could happen as soon as next year’s draft class.