We’ve probably all seen Charles Barkley play (or try to play) golf…and it’s pretty hilarious. Shaq’s partner from the TNT “Inside the NBA” program is one of the worst golfers of all time .. and that’s saying a lot. Still, when Sir Charles got the opportunity to play with PGA tour legend Phil Mickelson, they couldn’t pass up the chance to prank the Big Man.

What a sight that must have been on the course! One of the best ever – Mickelson – and one of the… well, you get the picture. The two were paired up for a great charity tournament called The Match: Champions for Change.

Along with Leftie and Sir Charles, the tournament included other stars from other sports, including Steph Curry and Peyton Manning. And while that foursome is certainly very familiar with trash-talk and jokes, the big gag was saved for Shaquille O’Neal.

Thanks to our friends at the web version of Golf Magazine for the details of this story. The match has been enjoying the warm weather and sunshine of the Stone Canyon Golf Club in Oro Valley, Arizona, just north of Tucson.

During the play Friday, Barkley was joined on the program by his Inside the NBA co-hosts Ernie Johnson, Kenny Smith and Shaquille O’Neal. On that show – and just about everywhere else – Barkley’s golf game is a constant source of jokes and hilarious video highlights.

After yet another round of brutal teasing aimed at Barkley by his TNT ‘mates, Mickelson announced he had a gift for his partner Barkley. With that, he presented Sir Charles with a dozen custom Callaway Chrome Soft golf balls. Normally that would be a pretty nice gift all by itself… but there was much more to it than just a dozen balls. Each and every of what normally would be a high-end box of golf balls was emblazoned with Shaq’s face on them!

Timing for the big presentation was perfect: Shaq and the rest of the Inside the NBA squad were on a video feed, so the camera was able to capture Shaq’s priceless reaction. (Check out the pic of that ball!) “This is the ugliest ball in the world here,” Barkley hilariously said of the Shaq-ified golf balls. 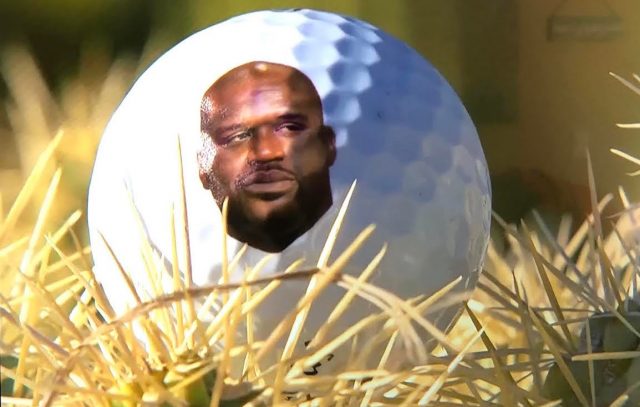 …. Of course, Barkley was referring to Shaq’s face on the ball, not the ball itself. Like we said, the ones Mickelson gave him are some of the best in the game. Leftie himself uses a slightly lower spinning version of the golf ball called the Chrome Soft X during his regular play on Tour.

Of course the Big Man was not going to let this go without a comeback: “Chuck, if you can’t read words, how are you going to read greens?”

Pranking or not, the pair of Mickelson and Barkley had a good day on the links. The pair won the day against Curry and Manning in the modified alternate shot format. Wonder if any of those one-of-a-kind Shaq-faced balls were lost on the course! That would be a real prize for another player to find out there in the rough!