The NBA is back! Wow, that was a quick off-season, wasn’t it? (Answer: Yes. Yes it was…) With the new season, that also means that TNT’s “Inside the NBA” is back, with Shaq, Charles Barkley, Ernie Johnson and Kenny Smith on the socially-distanced set. Good news, all around.

As of this writing on Wednesday, December 23rd, we’re still basking in the glow of Shaq-A-Claus on the Inside set last night. Sure, it was Shaq, but did you see that suit? Something like a Santa Claus outfit, but with a little more style. (See pic below… and for the full video from TNT, click here.)

Of course, Shaq-A-Claus has been doing his Christmas thing in the past week, delivering toys for needy kids in places like suburban Atlanta and Nashville. (See previous posts here on ShaqFu Radio for more info.) Who knows? Maybe he was simply between toy gigs and had to make a quick appearance on TNT…

On Inside the NBA, there was talk about the past bubble-enclosed season and how the Los Angeles Lakers move on from here. (For the record, the Lakers lost their opening night game to the crosstown rival Clippers by a score of 116-109.) 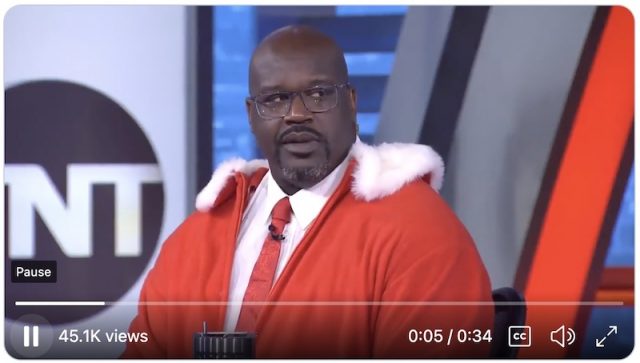 This past season, the Lakers saw the rise of another superstar duo, in the form of LeBron James and Anthony Davis. There was even some comparison to duos of the past… and you know that’s gotta mean Shaq and Kobe Bryant.

James and Davis even made the All-NBA First Team together, marking the first set of Lakers teammates to accomplish the feat since O’Neal and Bryant did it in 2004.

Still, Shaq isn’t really hearing it when it comes to duo-comparisons. In an interview with ESPN, he said James and Davis will need to build their own legacy:

NBA historians know that the pair of Bryant and O’Neal led the Lakers to a three-peat of NBA Championships between 2000-2002. Now James and Davis have signed on for new contracts with the Lakers, so the two will be playing together for a few more years, at least.

Can they repeat? Only time and future NBA seasons will tell. Still, repeating Bryant and O’Neal’s success would definitely grant the two All-Stars a special place in the franchise’s history.

previous
Shaq-A-Claus Sightings!
next
Shaq's Classic Ferrari Up For Auction