It’s been almost a year since the tragic death of Kobe Bryant, his daughter and several others in a California helicopter crash. The stories of Kobe’s life and influence have been a good way to remember and cherish the NBA legend. One of those closest to the story – and who’s shared a lot about Kobe – has been his former teammate, Shaquile O’Neal.

In a new podcast interview, Shaq talked about the ups and downs of his relationship with Kobe, on and off the court. Of course when it comes to on-the-floor work, there’s probably never been a better “power couple” than Shaq and Kobe. Stats, winning records and of course NBA Championship rings show how the two led the Lakers in dominating the league in the late 1990’s and early 2000’s. Three straight NBA Championships… will that feat ever be repeated?

On a recent edition of TheCoachesNetwork Podcast, Shaq talked about his personal relationship with Kobe. It’s no secret … we saw and heard some of the sparks between the two back in playing days. Personality clashes would eventually lead to splitting up the duo, with Shaq leaving the Lakers in 2004.

Still, Shaq said that even with the clashes of ego and personality during their time together in LA, the two superstars were able to find professional success. 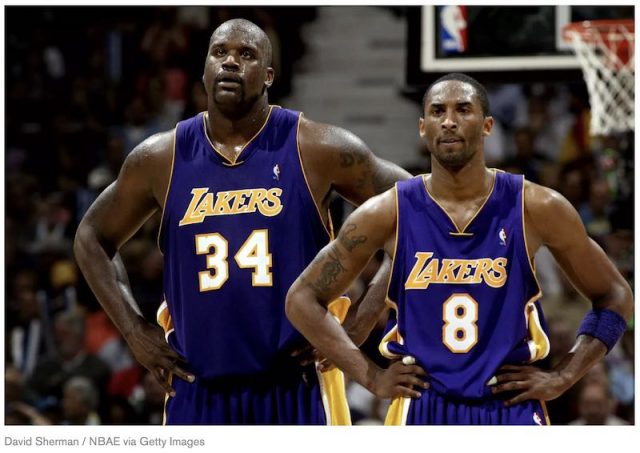 Shaq: “I was playing with a younger version of myself. Somebody that had the same mentality. A lot of times guys worry about titles instead of worrying about certain things. We were both about whose team it is, who’s the best player on the team? We had a job to do… [and we] won three championships in a row.”

When asked if he would go back and change something if he could, his response was clear:

It’s true, and not only in the sports world as well. You don’t have to be best friends (or even friends) to have a powerful working relationship with another person, or even a team-full of people. Common goals drive sports teams, business teams and other relationships. Kobe and Shaq demonstrated it on the court, and it works in many other aspects of life as well.

You don’t have to be best friends to be teammates. Kobe and Shaq were so good and had such immense respect for the game and for each other, that they were able to focus on basketball and find common ground with the Lakers.

previous
Hack-a-Shaq Really Did Work... Sorta
next
Shaq On Harden Move to Brooklyn