The new NBA season is just getting started, but there’s already been a blockbuster deal… sending James Harden from the Houston Rockets to the Brooklyn Nets. “The Beard” will join stars Kyrie Irving and Kevin Durant on the Nets, making for what could be a real powerhouse combo.

Reaction has been fast and sometimes furious. NBA legend Shaquille O’Neal is clearly not a fan of how James Harden handled his departure from the Rockets on this week.

Of course Shaq is completely familiar with players making demands, as well as trade and other demand coming from some big-name players. Still, on an episode of TNT’s “Inside the NBA” this week, O’Neal made a special point about Harden’s eyebrow-raising remarks as he left the team.

Even though Harden had definitely acquired superstar status in Houston, Shaq made some bold claims – some backed up with stats – about JH’s supposed poor performances in big games for Clutch City.

“He ain’t do nothing. He ain’t step up when he was supposed to step up,” Shaq added. As far as Shaquille O’Neal is concerned, The Beard should have handled things differently. 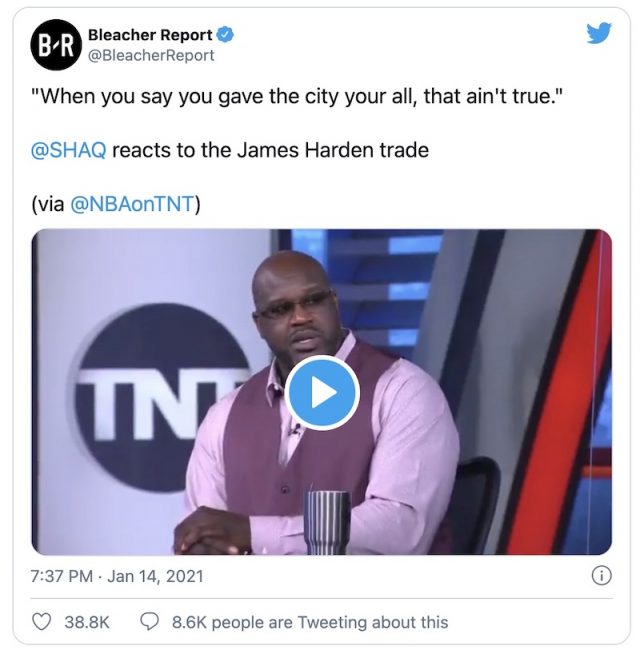 In his last post-game interview as a member of the Rockets, James Harden said that the situation in Houston is unfixable.  That was the last straw for the Rockets brass, who clearly tried to make it work with their disgruntled superstar at the start of the 2020-21 NBA campaign.

As for the move to the Nets, Shaq’s TNT teammate Charles Barkley says it’s going to be an interesting dynamic in Brooklyn. Back in December, Sir Charles said he was pulling for Durant to get what he wanted — James Harden in a Nets uniform. Still, Barkley seems to think it could be rough sailing in the big-city media town.

“I want to see James, KD and Kyrie together with that New York media. That’s just my dream scenario… I want that more than anything in the world,” Barkley said on ESPN Radio in December. “Because, you guys know, all three of those guys are ‘Number One.’”

We’ll have to wait and see if the addition of The Beard makes a difference in Brooklyn. Should make for some interesting hoops, no matter what.