Olympic handball? Is that even a thing? Apparently it is, and so does Shaq. At least he does now, and so will you in a few minutes of reading…

Thanks to our friends at www.Olympicchannel.com for info on this story. Yes, Olympic and World Championship handball is most definitely a thing, and the Men’s World Championship is going on this month in Egypt, ahead of the Olympic Games in Japan later this summer. Just like a lot of other sports, there’s been quite a menu of surprise results, Covid quarantines, and lots more excitement. .

At the games in Cairo, the big name on everyone’s lips is an equally big man who plays for the Democratic Republic of Congo, Gauthier Mvumbi. The 26-year-old big man absolutely stole the show in his country’s match against Argentina. In a game dominated by guys who look like soccer players, Mvumbi is six foot two inches tall and about 240 pounds. That’s not even close to Shaq’s stature, but he definitely stands out among other handball players. The Argentine team simply didn’t know how to deal with his physical presence.

In his latest game, Mvumbi played 11 minutes and 17 seconds…scoring four goals from four shots, six metres out. Again, we here at ShaqFu Radio don’t know much about handball, but that still sounds pretty good. 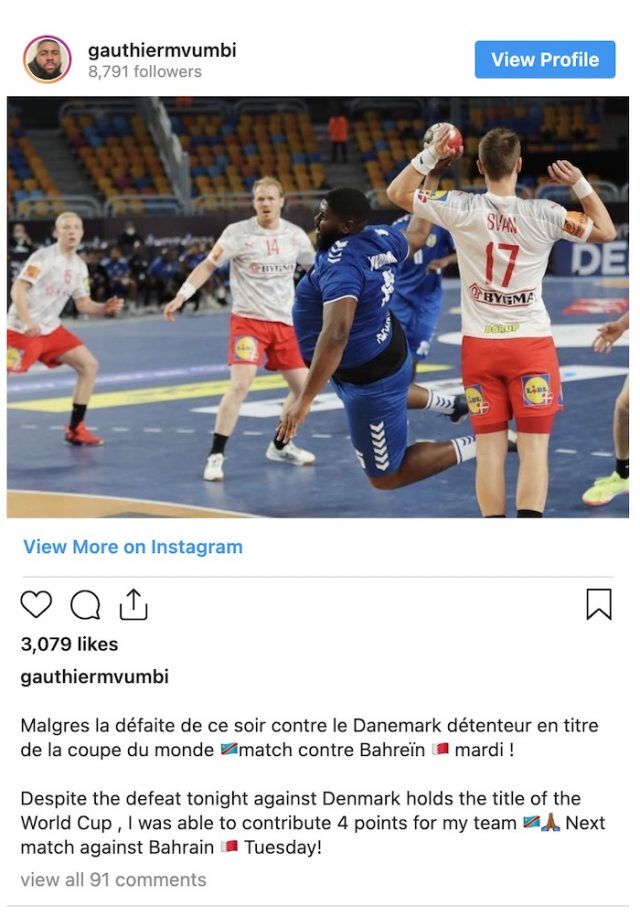 Then later, in a game against the reigning World and Olympic champs Denmark, Mvumbi again made his mark, scoring four more goals and maintaining his 100% scoring record until he finally missed a shot in the second half.

We don’t know if Shaq follows World Championship Handball, but apparently Mvumbi’s story got to him somehow. Earlier this week, Shaq posting a video to his Instagram story, including his saying, “They say you’re the Shaq of team handball, what’s happening?” 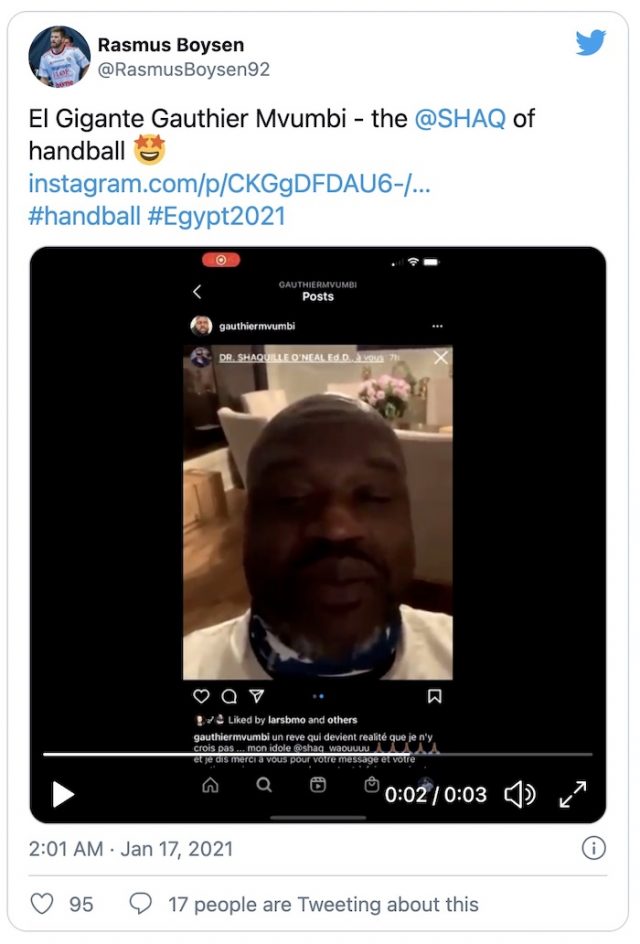 Mvumbi couldn’t believe it, replying on Instagram: “A dream that becomes reality that I do not believe in it … my idol @shaq 🙏🏾🙏🏾 my star 💫 🙏🏾🙏🏾 and I say thank you to you for your message and your support .. I do not quite understand what is happening but what I have to say to you: live your dream and fight for what you are.”

As for Mvumbi, his teammates call him “El Gigante” … something I’m sure Shaq could definitely relate to.

For more info on the story, and even some video of Mvumbi in play, click here and check out the page.

previous
Shaq On Harden Move to Brooklyn
next
Shaq, Barkley on Harden and Nets