Our man Shaq has had some interesting off-court battles with Portland TrailBlazers superstar Damian Lillard. Now, those dust-ups have had nothing to do with basketball… they were all about music and rapping. But now, it seems the Big Man has turned into a Big Fan of Lillard, also known as “Dame Dolla.”

If you’re interested, you can check out some of the past posts right here on the ShaqFu Radio blog. Here’s one of the more popular entries: https://shaqfuradio.com/2019/11/06/shaq-lillard-rap-battle-round-two/

On court, it’s a different matter entirely. Shaq is singing the praises of Lillard, and on  a recent edition of TNT’s “Inside the NBA” program, he called Lillars “the most feared man in the game.” Major props, for sure… focused on just the latest DL performance the other night against the New Orleans Pelicans.

With just under six minutes to go, the Pelicans held a pretty substantial 17-point lead in their game against the Blazers. That’s when Lillard made the decision to switch on the jets, and go absolutely nuts. For the game, DL had six 3-pointers, and more importantly, closed the deal with two clutch free throws with 1.2 seconds left for the win. Big numbers? You bet! Rare? Not hardly. It was Lillard’s fifth game this season with 40 or more points. 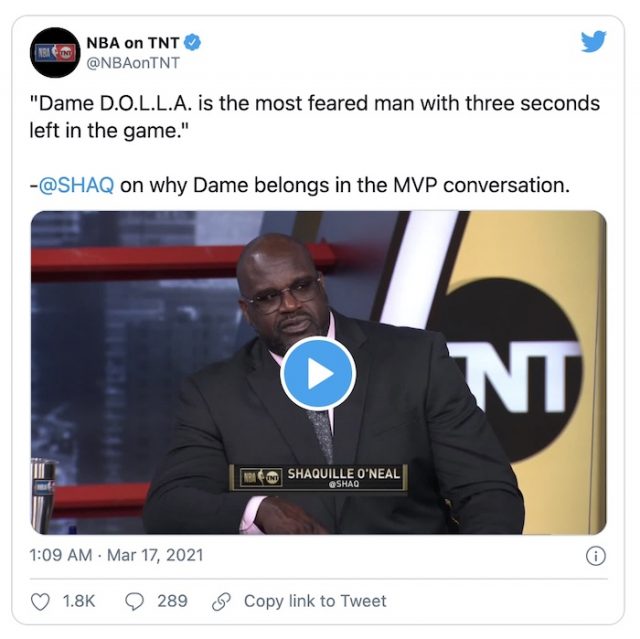 If you watched this year’s NBA All-Star Game, you saw a good display of Lillard’s mad shooting skills. He and Steph Curry put on a little show-within-the-show of three-point shots. Amazing.

On “Inside the NBA” after the latest Lillard outburst, Adam Lefkoe asked the obvious: How much Damian Lillard belongs in this year’s MVP race. Shaq answered quickly and clearly, calling Lillard the most feared man in clutch time.

In a recent post, we detailed how Shaq had exactly ONE successful three-point shot in his entire CAREER. On a halftime broadcast of Inside the NBA, Shaq and Lefkoe tried jacking up a few threes… mostly resulting in some ugly, ugly misses. 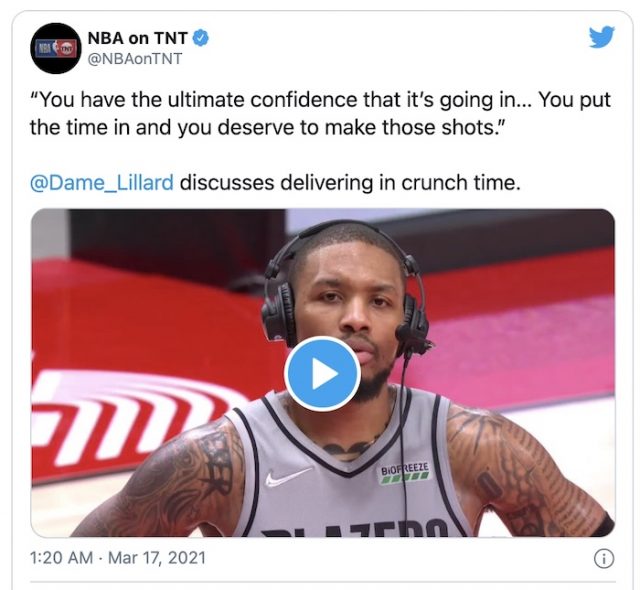 In a bit of humility, Shaq said that additional reps would do his shooting no good… Lillard jumped on that comment, saying “It’s over for you Shaq.”

Thanks to our friends at www.TheSportsRush.com for info on this story. Check out their post for more videos and info: https://thesportsrush.com/nba-news-dame-dolla-is-the-most-feared-man-in-the-game-shaquille-oneal-gives-props-to-the-blazers-legend-after-another-clutch-50-point-performance-in-a-comeback-win/