Why has this story not come out before? Where have we been all these years? Something like this… well, it’s just too weird and funny to be missed. Haven’t heard it? We’re talking Shaq’s – how to put this gently? – “experience” with a certain product… on a certain, very sensitive, part of the body.

In the big man’s own words, he’d “Never felt pain like that.” Some major on-court injury? Collision with another big man in the paint? No! Nothing like that. We’re talking about the time Shaq had some Icy Hot used on him, in a place that’s not meant for that kind of treatment – his genitals.

“I used to see IcyHot in the locker room and one day I had a thigh bruise and the guy rubbed it, but he rubbed it too high,” Shaq recounted with late night comedian Conan O’Brien on his podcast “Conan O’Brien Needs a Friend.”

“During the game, my little guys started getting hot. Like really hot, like I thought something was wrong. It got to the point where I was like, ‘hey man, I’ve got to go to the locker room, I need a doctor. My little guys are on fire’.” 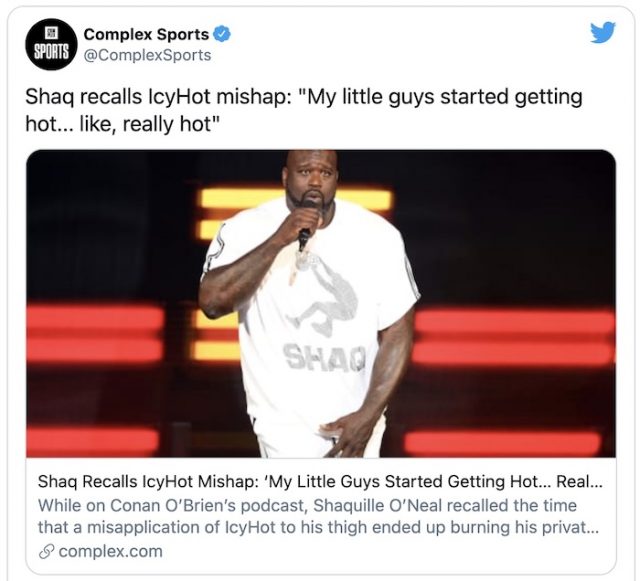 Shaq says the trainer admitted, to – shall we say? – an over-generous application of a product Shaq pitches on TV. Shaq left the game that night and headed to the showers… but it didn’t help.

“Then I take a shower and boy, did I think I was in hell. It gets worse and I’m in there screaming. There was this janitor in there and he said ‘compadre, you’ve got to use milk’.

“So I give him some money to go get a thing of milk. Now I’m in the shower pouring milk on my boys and the guys come in and are like ‘what are you doing?’ But the milk actually worked.

Barely containing himself, O’Brien asked Shaq, “That’s your testimonial for IcyHot? It set your testicles on fire?”

“I never felt pain like that in my life,” Shaq added.

Here at the offices of ShaqFu Radio, we’re guessing that this particular story never makes it into an Icy Hot TV commercial, hosted by Shaq, of course. But you’ve gotta admit, it would be hilarious!

Hats off to businessman Shaq for that little in-depth story about his experience with one of the products he represents.