UFO’s: Believe in them or not? Sure, we all love watching “Ancient Aliens,” but when it comes right down to it, do you really believe in visitors from outer space? Well, on a recent edition of the Jimmy Kimmel late-night TV show, Shaq admitted he’s totally on board with the entire UFO-being-real idea. Beam us up!

A recent edition of the TV news magazine show 60 Minutes” had a full report on UFO’s – or as the U.S. government calls them – UAP (which stands for Unidentified Aerial Phenomenon). On his show later that week, Kimmel talked with his audience about the report and other sightings, and said he was fascinated by what he saw.

That same night, one of Kimmel’s guests was our man Shaq. Interviewing O’Neal, Kimmel had one of the greatest intro lines ever: ‘As someone physically closer to outer space than the rest of us, what’s your take on what’s going on?’

If you saw the show, you saw how Kimmel talked a LOT about UAPs throughout the program, from his opening monologue and carrying it over to his interviews with guests. 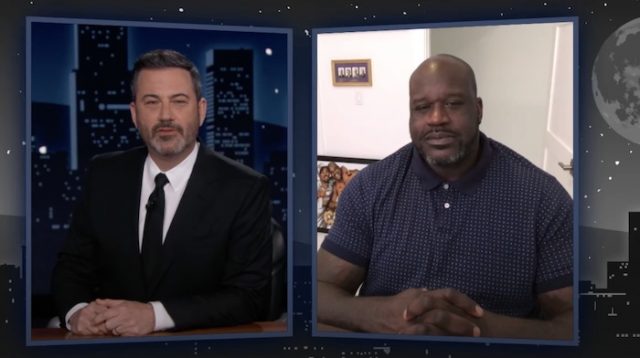 Shaq talked about his own “close encounter,” saying he saw something very strange in the night sky while out on a date as a younger man.

At first, Shaq joked about his experience with an alien – a creature that took the form of Charles Barkley, Still, O’Neal got a lot more serious moments later. “You know what’s crazy? I never told anybody this story,” O’Neal said. “In 1997, me and one of my good friends, Chris Flores, we were on a double date. We were coming from Hollywood Video in Madera, California. Right when we passed the fairground by this big open lot, I could have swore I saw a flying saucer come down, with all the lights, and it was spinning, and it just (makes sound). And it took off. Everything happened in less than five seconds, and we all looked at each other and was like (looks from side to side). I know that it was a UFO. I don’t care what anybody says.”

Needless to say, Kimmel and the rest of the audience were quite surprised. He asked Shaq if he ever told anyone about the incident.

“No, you’re the first person I told because I don’t want people thinking I’m crazy, but since I know you’re crazy and you believe in UFOs, it’s time to let the world know that Shaq believes in UFOs.”

Shaq Fu Radio @shaqfu_radio
10 months ago
It was the first night of work for the crew of TNT's Inside the NBA in four months... and Shaq got stuck in traffic! Late to work... and he heard about it! Check it out: https://t.co/Qmx6DGCdKp
View on Twitter
0
0
Shaq Fu Radio @shaqfu_radio
10 months ago
Celebrate! The NBA season returns for its second half tonight. Today, a story of Shaq "coaching up" one of the league's up-and-coming stars. Check it out: https://t.co/FDSRMDs2kd
View on Twitter
0
0
Shaq Fu Radio @shaqfu_radio
10 months ago
He's back...and the sharks are waiting. Shaq dives in for another appearance on the super-popular "Shark Week" series in Discovery Channel. Last time he was on, Shark Week history was made. Check it out: https://t.co/FPsJPiTmy5
View on Twitter
0
1