If you’ve followed Shaq’s “sporting life” these past couple of months, you probably witnessed his return to professional wrestling with AEW (All Elite Wrestling). What a spectacle! The big man got thrown from the ring and ended up disappearing into the night.

Well, it turns out that wasn’t a “one and done” kind of show. O’Neal says yes, he’s interested in coming back for another shot at AEW fame and glory. On a recent edition of TNT’s “Inside the NBA” program, Shaq said comeback plans are already in the works.

As we all know, Shaq has so many interests and businesses, it’s hard to keep track of them sometimes (how does he do it, anyway?). Along with his on-camera work with TNT as an NBA analyst, O’Neal owns (or has partial ownership) in multiple businesses. He’s also a commercial spokesman and “brand ambassador” for many other companies and services.

Along with all that, he’s a big fan of pro wrestling, and has already made a couple of appearances inside the squared circle. He made his first appearance in the ring back in 2009. BTW, he was still in the NBA at the time, playing with LeBron James and the Cleveland Cavaliers. In that particular appearance, he was a TV “guest host” and didn’t indulge in any sort of fisticuffs. (Probably against his NBA contract at the time, we’re guessing.) 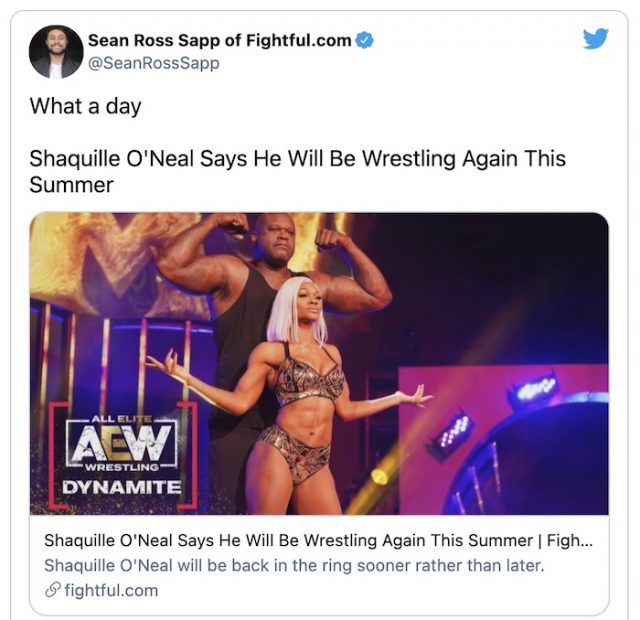 Jump ahead to 2016 when the guy who sometimes goes by the moniker “Big Aristotle” actually got into the ring for a fight. Shaq squared off against another oversized hero, The Big Show. The two went at it in the 3rd Annual Andre the Giant Memorial Battle Royale where the rest of the wrestlers in the ring would all band together to push both the Big Show and Shaq off the tightropes.

Then just a few months ago (as of this writing) Shaq returned to the ring with a different promoter, AEW (part of the TNT house of TV brands). In a real live match, he and a went up against Cody Rhodes in a tag-team matchup with two female wrestlers.

The appearance caught the eye of former wrestling megastar John Cena, who thought (out loud) that Shaq might still have some gas in the tank for a career in pro wrestling.

Cena: “It’s a shame that you were born so large and so gifted on the basketball court because you could have been something in WWE. I still think you can be.”

So… when will the big man be back in the wrestling spotlight? “Soon, this summer,” teased Shaq on that recent Inside the NBA episode. No clues yet if he’ll return in another tag-team match or something different. We’ll have to wait and see. Either way, it’s sure to be big, loud and exciting.

Shaq Fu Radio @shaqfu_radio
10 months ago
It was the first night of work for the crew of TNT's Inside the NBA in four months... and Shaq got stuck in traffic! Late to work... and he heard about it! Check it out: https://t.co/Qmx6DGCdKp
View on Twitter
0
0
Shaq Fu Radio @shaqfu_radio
10 months ago
Celebrate! The NBA season returns for its second half tonight. Today, a story of Shaq "coaching up" one of the league's up-and-coming stars. Check it out: https://t.co/FDSRMDs2kd
View on Twitter
0
0
Shaq Fu Radio @shaqfu_radio
10 months ago
He's back...and the sharks are waiting. Shaq dives in for another appearance on the super-popular "Shark Week" series in Discovery Channel. Last time he was on, Shark Week history was made. Check it out: https://t.co/FPsJPiTmy5
View on Twitter
0
1