Good news, bad news? Nice and not-so-nice? That was the bottom line of the latest exchange between Charles Barkley and Shaquille O’Neal on a recent edition of TNT’s Inside the NBA recently.

Of course Sir Charles and Shaq are regular commentators on the show, and the opinions are running hot and heavy as the NBA playoff run is in its final days.

During the halftime show of the game featuring the Milwaukee Bucks and Atlanta Hawks, the pair traded their usual smack, but it actually started out with Barkley offering O’Neal a strong compliment. Of course there was no way Barkley was going to offer something positive without adding a zinger, which of course he did. 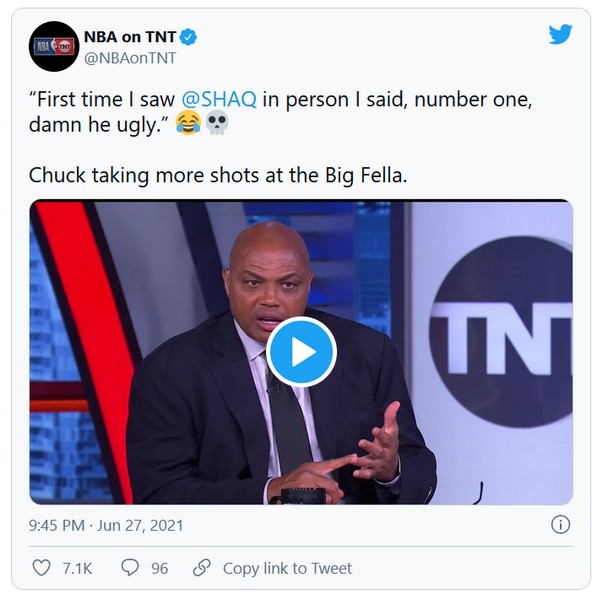 Speaking about current Bucks superstar Giannis Antetokounmpo, Barkley included Shaq in a roundup of big men with equally oversized on-court skills. “Shaq, Kevin Durant, this kid here (Giannis). Seven feet guys who you’re like, ‘wow.’ To be that big, that strong and that fast…it’s hard to match it,” Barkley said.

There was actually a moment of silence on the set from Barkley and Shaq, along with host Ernie Johnson and Kenny Smith. Maybe they were all shocked that Barkley would actually have something good to say about O’Neal, when the two are usually going at each other. But Barkley couldn’t leave well enough alone.

Sir Charles: “The first time I saw Shaq in person, I said man – No. 1, he ugly. But to see a dude that big, that strong. Same thing with Giannis, LeBron is like that. Just freak of natures. But this dude here man, when he’s aggressive and running to the basket, he’s tough to stop.”

O’Neal seemed to appreciate the compliment outside of the “ugly” comment. (Maybe he was just as shocked as we were to hear something positive from Barkley about his co-host!) Still, he had a a comeback of his own, and the show went on as it usually does. Always something interesting with Shaq and his friends!

previous
Shaq, Big Show Match? It Could Happen
next
Crazy Decades-Long Streak Comes To An End