We’ve talked about this on the ShaqFu Radio blog before (probably after last year’s NBA Finals), but the story is back in the news again… and a long-time “tradition” is over. Well, not really a tradition, but a super-interesting Shaq-based connection.

After this weeks’ Western Conference playoff series loss to the Phoenix Suns, the Los Angeles Clippers are out of the post-season tournament. And with the loss, a streak dating back to 1984 has come to an end. Yes, a 37 year long streak!

Believe it or not, Shaquille O’Neal had been teammates with at least one participant in the NBA Finals dating way, way back to 1984. Last season, the honor of that connection went to Danny Green. From the bubble last year, the NBA Finals were played by the Los Angeles Lakers and the Miami Heat. Between those two teams, there were several former Shaq teammates. 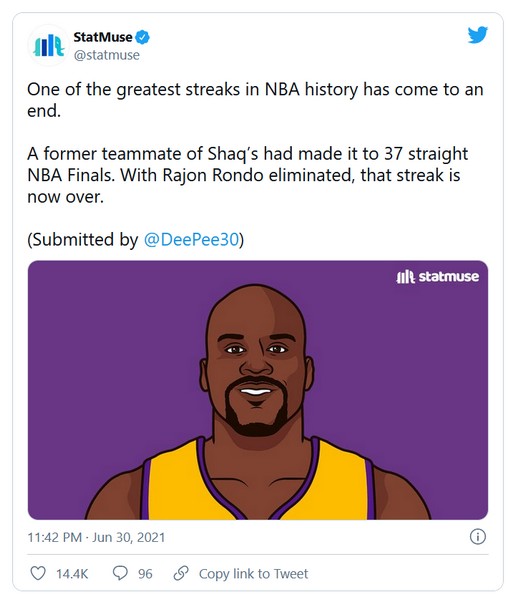 On the Clippers roster this year – Rajon Rondo – another former Shaq teammate. And with the Clips loss, the streak ends. There are no former teammates on the Suns, Bucks or Hawks.

Crazy? You bet! Quite a streak, over all that time! Still, all streaks have to end eventually, and time catches up with all of us. Someone actually put together all the stats. Check it out: 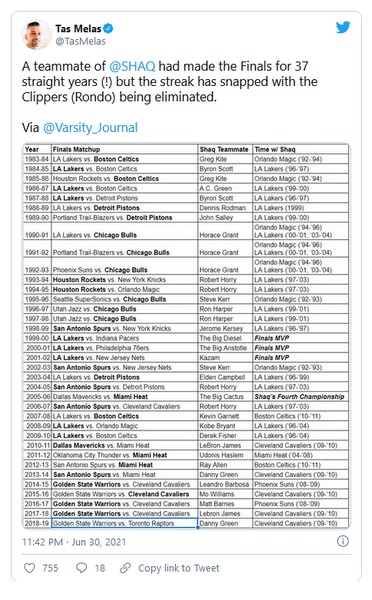 So hats off to all you former Shaq teammates, putting together a streak that’ll probably never be repeated… certainly not for Shaquille O’Neal!