It’s that time of year. Time for high school students around the country to start making big decisions about life. For some, that means making a decision about where to go to college. That’s especially true for athletes who are being courted by various schools with scholarships and other perks to offer.

Just this week, Shaquille O’Neal’s daughter Amirah O’Neal made it official: She’s going to join her brother with a commitment to Texas Southern University, an HBCU (Historically Black College / University.)

The 19-year-old made the official announcement in the same way many young people do today, with a social media post. Amirah’s was on Instagram this past weekend. Previously, she been a walk-on at her father’s alma mater, Louisiana State University (LSU).

Writing on IG, Amirah said, “I see the doubt in their faces, they didn’t think I would make it.” 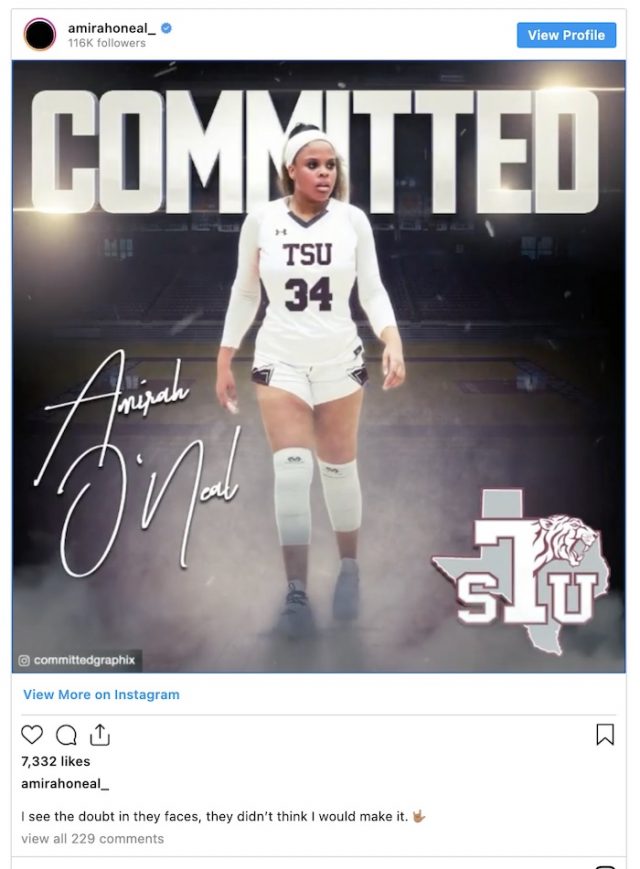 Playing at LSU, Amirah averaged 17.2 points per game as a junior during the 2018-2019 season. Previously, she’s also been awarded player honors at the 2019 MaxPreps California All-State Girls Team with honorable mentions, and she was a two-time All-state honoree.

Now 6’ 1”, Amirah is a native of Los Angeles native who’s been playing basketball since she was 10. Now she’s joining a team that was a strong contender for the SWAC championship before COVID-19 hit.

With coach Cynthia Cooper-Dyke, Texas Southern finished 20-10 in the 2019-20 season. The team had been headed to the SWAC Championship as the No. 2 seed, but the tournament was eventually cancelled due to COVID.

In signing the letter of intent with Texas Southern, Amirah is joining a new generation of athletes promoting and joining HBCUs. She is the second in her family to commit to Texas Southern.

Earlier this year, her younger brother, Shaqir announced that he is joining TSU’s men’s basketball program. There’s definitely a connection with the school and the brother and sister’s father. The mens’ head coach is Johnny Jones, who was an assistant coach when Shaq played at LSU.