Sure, we see him on TV all the time. Inside the NBA, commercials, interviews. Everywhere. But as for Shaq, he says he’s done being a “celebrity.”

Music, TV, movies, commercials online and on the air. Business dealings and promotions all over the place. Still, in a new interview with the New York Post Shaq says he’d much rather be remembered for being a good guy – for his helpfulness and kindness, then for the whole celebrity thing.

The interview with the Post was centered on his new marketing campaign with Kellogg’s cereals, and their “Mission Tiger” program to help update and upgrade sports and recreation programs in schools nationwide. But that didn’t stop him from talking about his ditching celebrity status:

As a follower of the ShaqFu Radio blog, you know O’Neal has gone a different way in his post-NBA career. Yes, there’s been a lot of business deals and TV commercials, but we’ve also reported on so many different and random acts of kindness…of helping average people when he can. Shaq says his goal is at least two different helping-out experiences every week.

Some of the stories are well-known. He’s helped a young man pay for his engagement ring. He’s helped a mom buy computers for her kids. More recently, he’s made a big donation to one of his favorite Atlanta-area restaurants that’s fallen on financial hard times due to the COVID-19 pandemic. 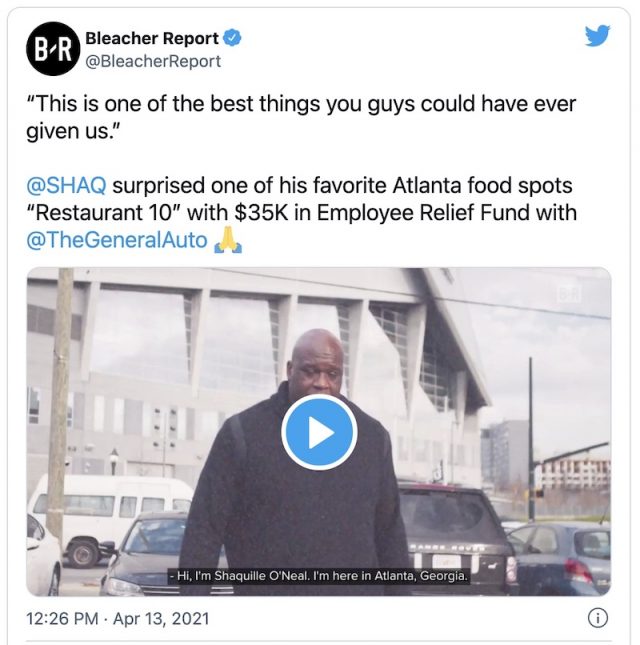 “All my life, everyone probably gets stereotyped, but us celebrities, we get stereotyped because most of these celebrities are out of their mind. I don’t do that. I’m a regular person that listened, followed his dreams and made it,” he said.

As a young man in Newark, New Jersey and elsewhere, Shaq had a tough life. He’s given credit to the Boys & Girls Club of America for helping to keep him off the streets and out of trouble.

Shaq: “I came from nothing. But, just because I made it doesn’t mean I’m bigger than you, smarter than you — just because I have more money doesn’t mean I’m better than you. I’ve never been that way and I never will be that way. So I don’t want to be in that category of people. When they talk about Shaq, what do you say? ‘He’s a nice guy.’ Because what else can you be? You’re either nice or you’re the A-word, and I definitely won’t be looked at as the A-word.”

Mission Tiger is his latest good-guy program. Eventually, it will impact more than 60,000 middle-schoolers across the nation. Mission Tiger is using proceeds from some Kellogg’s products and other sources to buy new sports equipment, uniforms and more for students, and to rebuild old sports facilities. Plans include helping programs in the six cities where O’Neal played over 19 seasons — Boston, Cleveland, Los Angeles, Miami, Orlando and Phoenix.

So… no more “celebrity” for our man Shaq. No worries, of course – he’s still the great guy we know and love!