Yes, the NBA season is still relatively young, but already Charles Barkely has had one of the great quotes of the year. While checking out highlights of a recent New Orleans Pelicans game, Sir Charles opined that star power forward Zion Williamson looked like what would happen if Barkley and Shaq would have a baby.

Now, Williamson has been the subject of a lot of humor  recently, especially when it comes to his weight. Seems he probably put on a few (maybe more than a few) pounds after having foot surgery and was not able to play or practise for a time. Needless to say, his current physical stats have some Pelicans fans “concerned” about his future in the game.

While Zion was always been a big man in the game, he’s definitely not in the physical shape he used to be. Set the WayBack Machine for his time at Duke, and you’ll see a plyer in great physical shape (ah…college kids). More recent sightings (easy to find on TV coverage of NOLA games), shows a guy who’s put on a lot of weight.

On a recent edition of TNT’s “Inside the NBA,” Barkley and O’Neal had some fun at Zion’s expense. After seeing footage of Zion trying to work out and get his legs recovered quickly before the game, Barkley joked that Zion looked like he was Barkley and Shaq’s baby. 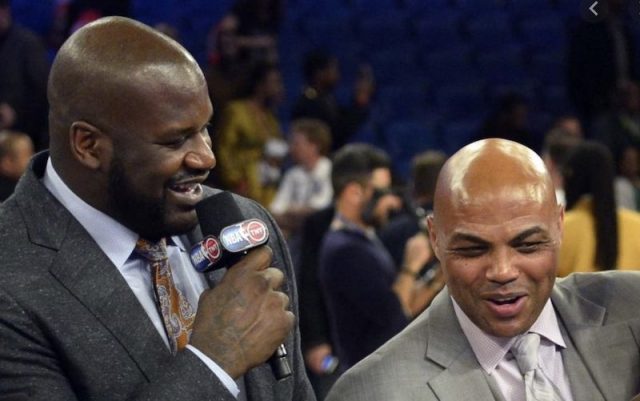 But Charles has also had more serious criticisms of Zion. He related the story of how Moses Malone told him he was out of shape during his days in Philadelphia. Now, Sir Charles says Zion is in need of some guidance – and maybe a kick in the butt – to get him inspired to do something about his weight and physical conditioning. Charles said poor diet and conditioning now could lead to poor play and injuries in the future.

From the show, Charles said: “Looks like me and Shaq had a baby. I’m concerned. I am really concerned about … I tell this story, and I’m being critical, it is what it is. Moses Malone said to me, he said I was fat and lazy. And I started to cry a little bit.

He’s already hurt, you should not get hurt when you’re young. And he’s already had surgeries on his legs, now he’s got a broken foot, he gonna have to learn, even when you’re hurt, you’re gonna have to control your eating. When guys get hurt, Adam, and they come back, you’re trying to get in shape. And if you’re putting on that stress on your knees and your feet, you’re just gonna keep getting hurt. Somebody’s got to be a grown person down in that relationship and say, ‘Yo, man, you got to get in shape.’”

You can see the full exchange here:

ESPN analyst and former NBA player JJ Reddick have also talked about concerns over Zion’s current weight issues. Reddick says that given the monumental talent that Zion is, his current shape will prevent him from being able to reach his true potential in the coming years.

Will Zion get the message? Only time will tell…but he needs to make some moves quickly. The season is up to full speed, and if the Pelicans star is going to make a mark in the Association, he’ll have to be in much better shape to see it through.