We’ve gotta set the Way, WAY Back Machine for this story…it dates from Shaq’s time in high school, and how a couple of huge events in those years changed him forever. Details for this story are from a longer interview with journalist Graham Bensinger. Check below for a link to the full video.

Of course we all know how popular and well-like O’Neal is today. How after his stellar NBA career, he dove headfirst into business and other ventures that have made him even more of a star, and an even bigger force for good.

But it wasn’t always like that. Growing up, Shaq said he was the object of bullying and ridicule… we’re guessing it was all about his size, even back as a young man.

Shaq told Bensinger how kids calling him names like Shaquilla the Gorilla or Shaqueer. That left him with two options — “either intimidate you or make you laugh.” And for a long time, it seemed O’Neal chose the first option of beating on people. That all changed one day in fifth grade. 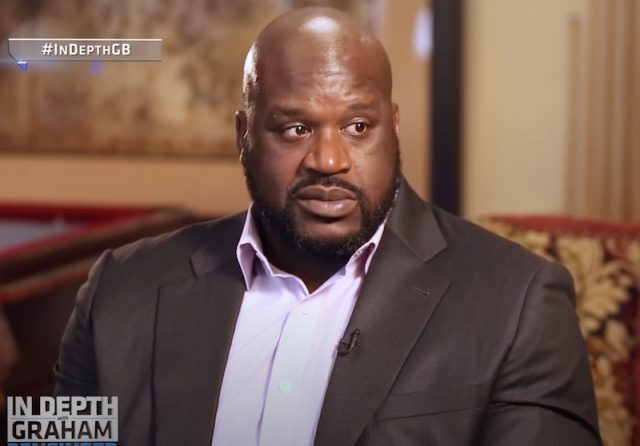 From the interview: “I was about thirteen, and this guy ratted me out for throwing something in class,” Shaq said. “I caught up with him after school and beat him up. When the kid went down, I kicked him. Then he started having an epileptic seizure. A man ran out of his car and put something in the kid’s mouth, and got him to stop. If that guy hadn’t come, the kid might have died, and I’d have been done, done, done. I was a different person from that day on.”

That wasn’t all. All that bullying and mocking led to the young Shaq really struggling with his school studies – the book work, not the basketball. Shaq says that led to real self-esteem issues, and a feeling that he simply wasn’t smart enough.

Yet it was those troubles that led to another a-ha moment for the young Shaq…one he describes as life-saving. Bottom line: it’s all thanks to a geek from his high school.

Shaq says he watched as another young man was being bullied – something he’s had plenty of experience with himself. Yet O’Neal says this kid was “cool.” Shaq: “He never said anything. We called him McDougal. I wish I could remember his name. Everyone was messing with him so I came in and said if you mess with McDougal, you gotta mess with me.”

Quite the turnaround! Rather than Shaq being the one to deliver the bullying and beating, he put his size to good use, intimidating those who were bullying McDougal. And despite wanting nothing in return, the kid gave O’Neal one of the most valuable lessons that he remembers to this day.

Shaq, again: “I was sitting at the lunch table and he came to me and said he appreciated it. He said, ‘I hear you’re having some problems in government (class). I can help you out.’ Every day after school, he would tutor me. The way he tutored me, I was like this really isn’t that bad. Because I had self-doubts, I was like I’ll never pass anyway. He helped me out and that’s when I realized that nerds and geeks are very cool people. It also taught me another valuable lesson that you don’t always have to judge people.”

Both of these instances helped Shaq become the man he is today. And not just in terms of basketball, but through everyday life and countless gestures of helpfulness and charity that we document here on the ShaqFu Radio blog.

Just goes to show how we can all ‘just get along’ as the old saying goes, and help each other, too. Whatever gifts and skills you have, they can be helpful to someone in need.