What’s going on with Ben Simmons and the Brooklyn Nets? Analysts and others around the game are calling him out for his on-again, off-again desire to get back in the game. Shaq and Sir Charles have been right at the front of the criticism.

This week, the Nets are playing the Boston Celtics in their NBA Playoff round. Simmons had openly talked about coming back for Game 4 after he reported back pain and other physical issues that kept him out of Game 3 Saturday night (as of this writing).

Then the Nets lost to the Celtics in an exciting game. Boston is now comfortably up in the series 3-0Just for the record, teams going up 3-0 in their series have won said series one hundred percent of the time, so things aren’t looking good for the Nets.

So now it seems Simmons is reporting more back pain, and says he won’t play in Game 4. It took about one point three seconds for the reactions to pour in from analysts, commentators and NBA Twitter. None of the reactions were good.

Usually a nice guy, TNT’s Reggie Miller called out Simmons for what he called a lack of competitive fire. That was just the beginning. On their program Inside the NBA, fellow TNT analysts Shaquille O’Neal and Charles Barkley also reacted to the Simmons situation. Shaq called it a “punk move.” 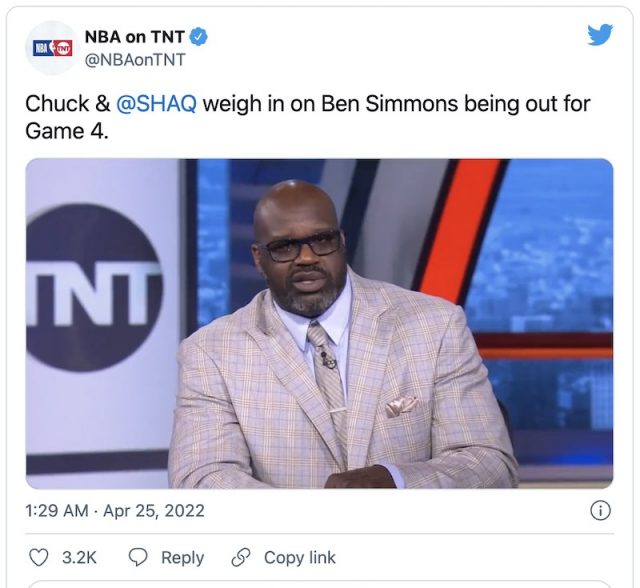 Shaq on TNT: “In the hood, we call this a ‘punk move.’ When things are goin’ good, ‘Yeah, I’m gonna play.’ If you can play on Saturday, you can play on Monday. Now that they lost, ‘My back hurt.’ You’d get more respect from the people if you say you’re not ready to play, and don’t say nothin’ else. Don’t be shootin, telling everybody you’re coming back. That was a punk move.”

Shaq said Simmons should have “stepped up to the challenge” and helped his team try to win. Sir Charles was quick to agree. Charles: “Fans are significant, that’s for sure. But let me tell you something. When the players don’t respect you, that’s a big deal. Players say, ‘we can’t count on this dude.’”

Of course we don’t know for sure if Simmons was in shape to play or not. Still, he had reported getting in some practice work and not having any pain. Hard to say. Only Simmons (and perhaps the Nets training staff) know for sure.

Should the Nets lose this series – and statistics say that’s a certainty – it will have been an interesting season for Simmons. It’s now looking like Simmons will actually not play a game this entire season. If the Nets force a Game 5, will he play? Who knows? It’s been a crazy year, for sure.