We’ve heard Shaq talk about getting healthy in the past. Heck, it’s been a minute since he did a big interview with Men’s Magazine about doing more working out and less bad eating. But now… vegan? Well, before you go crazy with the idea, let’s dig into the full story, shall we?

So in a recent interview with Comedian Rip Micheals for his TV show “Urban Eats and Treats,” O’Neal says he’s interested in trying out the “vegan thing.” He’s not going vegan full-time, but he is interested in becoming a more healthy version of himself, and he’s found some help in getting there.

Thanks to our friends at TMZ for sharing the interview video on their website. You can check it out here: https://www.tmz.com/2022/05/02/shaquille-oneal-going-vegan-breaks-down-new-healthy-diet/ 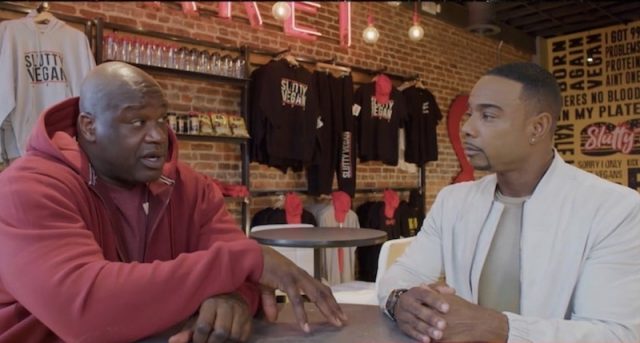 “Whenever I want to cheat, I come over here and cheat,” he said.

As for his regular eating habits, Shaq says in the past, his “healthy diet” would have consisted mostly of chicken salad, steak, and fish, but now he’s trying to upgrade to more healthy choices.

Regular readers of the ShaqFu Radio blog know that a lot of O’Neal’s business ventures include food-based companies, like Papa John’s Pizza, Auntie Anne’s, and Krispy Kreme to name a few. Still, his personal eating habits are going to be changing a bit, if he follows through on the less-meat, more-vegan concept.

Michaels asked Shaq if he ever cooked on his own. That drew quite the disapproving look from the big man, who admitted that he has his own personal chef. Also, as he was growing up, his mother and sisters did all the cooking, while he handled other chores around the house.

By the way, Shaq’s mom still lives close to him in the Atlanta area…so he said that when he needs a fix of mom’s home cooking, she’s close by. Nice!

Still, Michaels pressed O’Neal to know if he ever did cook anything for himself, and if he did, what it would be. Maybe going back to his college days at LSU, Shaq said that if he HAS to cook, it’s Top Ramen. Yup, the cheap, easy-to-fix noodle soup that’s a staple for non-cooks around the world. If you attended college (or visited someone in school) you know it’s a regular!

previous
Shaq Changing His Mind On LeBron?
next
Shaq Hoists Another Trophy!