Shaq has hoisted a few Championship trophies in his time, but this may have been a real first for the big man: Jacking up a giant-sized trophy that’s not from a sport he’s ever played… at least not on a professional basis!

If you’ve been watching the NBA playoffs on TNT at all, you’ve probably seen the ads for the fact that TNT is also now covering the NHL and the Stanley Cup Playoffs, which started this week. That’s new for TNT, but we trust they’ll do a good job, just like they do with hoops.

As part of the introduction of playoff hockey on the network, the NHL made an official visit to Studio J in Atlanta and the set of Inside the NBA with our guys Shaq, Ernie, Kenny and Sir Charles. And they brought the real deal – the Stanley Cup itself!

Bringing the cup was Rick Tocchet, a 1992 NHL Champion with the Pittsburgh Penguins. Tocchet is one of the new crew members covering NHL playoffs for the network. BTW, Tocchet won the Cup twice more in his role as an assistant coach with Pittsburgh for the 2016 and 2017 seasons. 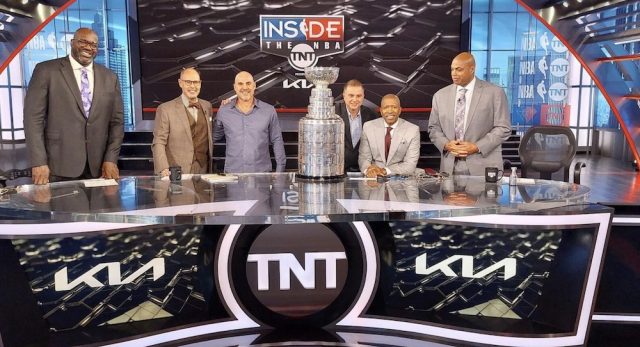 What a sight! Like we said, Shaq has certainly had his opportunities to lift trophies in his career on the court, but there’s never been anything like this. O’Neal and Kenny Smith, along with host Ernie Johnson took turns hoisting the Cup, just like you see NHL players do after they’ve won the final game of their championship series.

Funny moment: O’Neal at first had a bit of difficulty lifting the cup over his head (it’s pretty big and hefty, after all). Shaq won four NBA Championship titles in his career; three with the Los Angeles Lakers, and one more with the Miami Heat. Trying to lift the cup, he said his shoulders still hurt “from carrying the Lakers.” 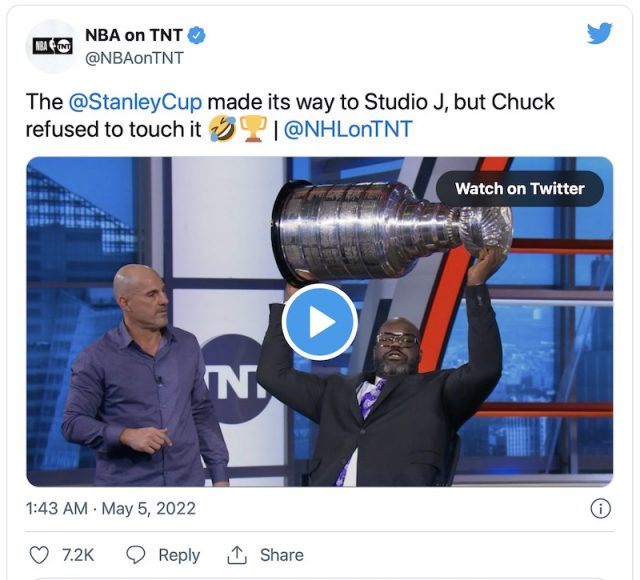 Another super interesting note: Charles Barkley, who is surely the biggest hockey fan on the TNT NBA crew, refused to touch the Cup. He said it was completely out of respect. Nice touch! Sir Charles already has a place in the NBA Hall of Fame, but never won a title in his 16 seasons in the NBA.

Here at the offices of the ShaqFu Radio blog, we’re big hockey fans too. Looking forward to NBA AND NHL coverage with our friends on TNT as both seasons work through their respective playoffs.