It’s become a staple of the post-game analysis and commentary, and it’s something we sports fans see with every sport. We’re talking about the post-game interview. After the final buzzer or horn, one of the stars of the game (usually from the winning side) is handed a set of headphones with a microphone, and talks about the just-completed game with analysts back in the studio. Happens all the time, right? But how about an interview BEFORE the game? Not so much…

Yet that’s just what happened shortly before the crucial Game Seven of the NBA Playoff series between the Phoenix Suns and Dallas Mavericks this past Sunday evening (as of this writing and post) on TNT.

It was just about 13 minutes before the Suns and Mavericks tipped off that series-ending Game 7 that Dallas superstar Luka Dončić put on that popular headset and did a quickie interview with the team at TNT’s Inside the NBA.

It was only a minute, but it ended up causing quite a controversy and conversation for basketball fans, and more than that, for the Inside the NBA team itself. Once the short interview was over, both Charles Barkley and Shaquille O’Neal ripped the idea of a player conducting an interview so close to an important game…BEFORE the game was played. 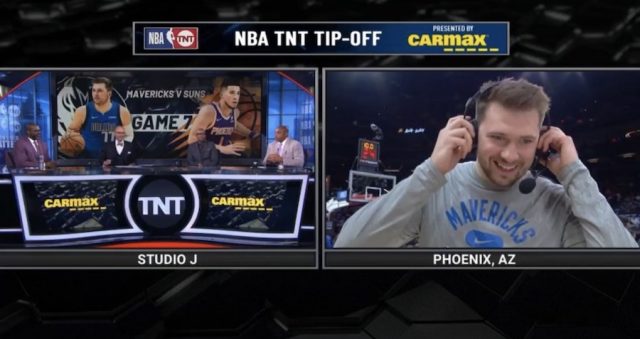 Indeed, the staff here at the ShaqFu Radio Blog can’t remember a time when we’ve seen a PRE-game interview. Sure, sideline and bench-side reporters often talk to coaches during the game, in small, bite-sized interviews recorded at quarter and halftime breaks. We see those all the time. But never (that we can recall) an interview with a player, before a win-or-go-home game.

Shaq was right there with his broadcast partner: “Yeah, I was just gonna say that. I agree.” O’Neal wondered out loud what would have happened had the Mavs lost the game. Would they have blamed it on Luka and his interview before the action started? For superstitious players, that thought might have come up. Coaches might have had something to say, too.

Inside the NBA host and ringleader Ernie Johnson, usually the cool head of the crew, defended the action, saying, “Hey, he could’ve easily said ‘No, I don’t want to do that,’” Johnson also made it clear the Dallas superstar wasn’t forced into the interview by a TV contract or anything else.

As for the game itself, Dončić was pretty much unstoppable. He scored a game-high 35 points (27 in the first half) and lead the Mavericks to a huge 123-90 Game 7 victory over the Phoenix Suns.

To say “huge win” might honestly be an understatement. The Suns were completely embarrassed, putting in one of the worst single game performances by a number one seed in NBA Playoff history. Dallas now faces the Golden State Warriors in the Western Series Finals, starting Wednesday night. We’ll have to wait and see if Luka or any of his teammates does any more pregame interviews.