It started with Sir Charles, but Shaq and others have added their comments as well… talking about Kevin Durant and his career moves between NBA teams.

Just this week (as of this writing) Barkley tweeted what could only be called a pretty strong hot-take all about Durant’s career during the times he was not a member of the Golden State Warriors.

There were tweets, and then a bigger interview on ESPN. Sir Charles: “He gets mad when we say it, he piggybacked on the Warriors to win his first two championships, but if you go back and look at his career, as the best player and being a leader that all goes with that, he’s been an abject failure” 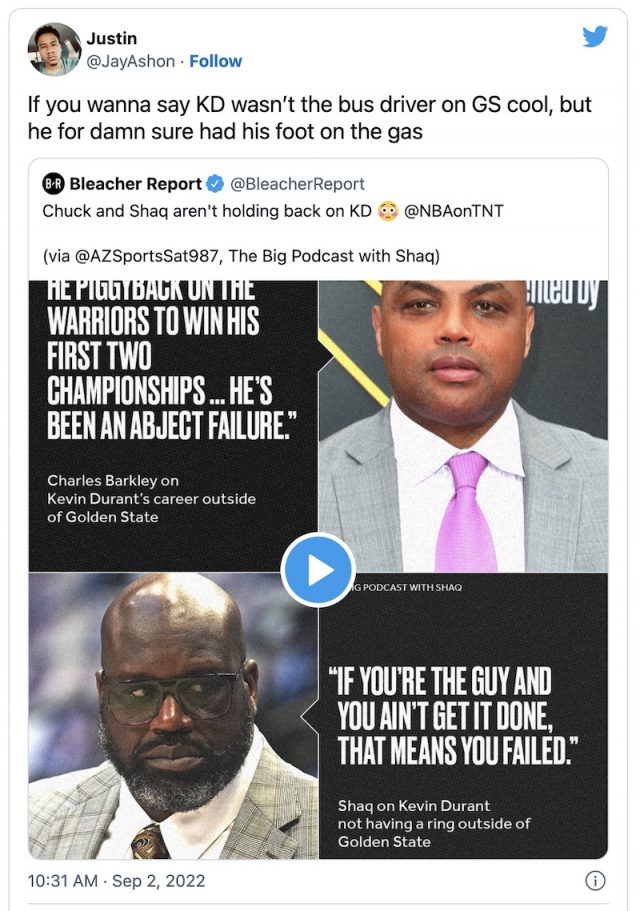 Barkley was obviously referring to the fact that when he was with the Warriors, KD had the good fortune – along with the rest of the team – to be playing with a certain Steph Curry, one of the all-time greats of the game, and absolute certain future Hall of Famer.

Again, Barkley: “I mean, every time he’s been like the guy who has to be the leader and the best player he has not had success.”

Meanwhile, on his latest Big Podcast with Shaq episode, one of the regular hosts asked the big man about Barkley’s “abject failure” comment. In no uncertain terms, Shaq agreed with his TNT broadcast partner.

Shaq: “Yeah. If you go back and look at his career as the best player and being the leader, it all goes with that.”

O’Neal talked about the NBA Finals series when KD and his then-team the Oklahoma City Thunder were up on Golden State. “See, we were there, we saw OKC up 3-1 [over Golden State]. One more game. And when you’re the guy, all the pressure falls on you. A lot of people are talking about the bus driver – Chuck was absolutely right. He [Durant] was not driving the bus in Golden State. You were on the bus, sitting up front.” 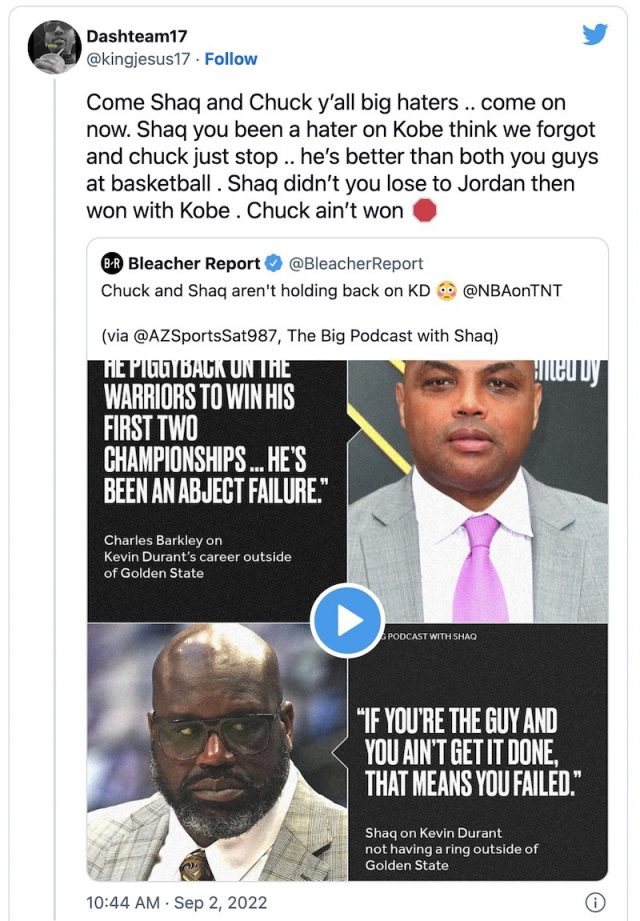 Still, there are plenty of fans who took to the social media channels to dispute the criticism. After all, KD was a two-time Finals MVP during his playing days with the Warriors.

Still, it seems clear to Shaq and Barkley: Until Durant wins a championship as the undisputed leader on a team, there will be questions and room to question KD’s legacy in the game.