Brooklyn Nets star Kyrie Irving has always been a bit of a lightning rod, attracting plenty of attention – most of it negative – for his various opinions, comments and stands on issues of the day. The question now: has he gone too far?

As of this post-date, Irving was in the spotlight again for antisemitic comments in Twitter and IRL in a post-game news conference. The dictionary defines “antisemitic” as “Hostile to or prejudiced against Jewish people.” There’s been several news items on that topic lately, including the story of how an electronic sign outside the Georgia / Florida football game in Jacksonville, Florida was hacked, and some ugly comments were posted for thousands to see.

Within a few days, both Shaq and Charles Barkley called for the NBA to officially reprimand for what they called “hateful” actions. 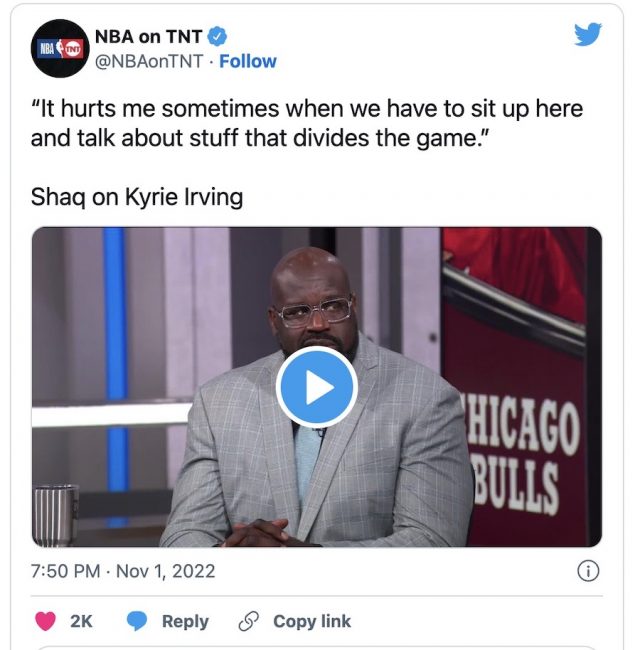 It started with Barkley on the TNT show Inside the NBA: “I think the NBA dropped the ball. I think he should have been suspended. I think Adam [Silver] should have suspended him. You can’t take my $400 million and insult my religion. The NBA, they made a mistake.”

Barkley used some well-known examples to talk about how the Association suspended players for using homophobic slurs, and believed the same should happen with race and ethnic hate.

“We have suspended and fined people who have made homophobic slurs. I think if you insult the Black community you should be suspended or fined,” Barkley said, adding, “I can’t believe we’re talking about this idiot.” 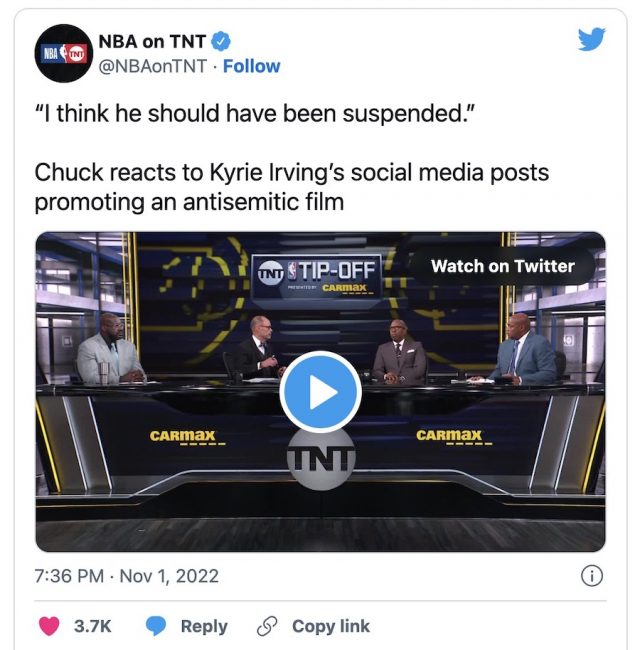 Shaq was on the same page, talking about how he knew he had to be “very responsible” with what he posted on social media.

As for the Nets, team owner Joe Tsai has spoken out in opposition to Irving’s tweets. As for Irving himself, he at first defended his posts while talking to reporters after a game, but then he later deleted the original tweet that first caused the controversy.

As of this posting, no official team action has been taken against Irving. Others – like music star Kanye West – have been dumped by various sponsors and commercial partners. Time will tell if there’s a bigger backlash to come for Irving.