We’re not going to call it a beef or a fight, but the words continue to move – sometimes with heat – between Shaquille O’Neal and Ye, the artist formerly known as Kanye West. On his latest podcast – the Big Podcast with Shaq – the big man took some time to respond to some of the most recent comments coming his way, and going back out, too.

Most of the action has been on Twitter, which of course is having a moment of it’s own as this post is being written. Elon Musk only recently conducted a poll of Twitter users asking if he should let former Present Donald Trump back on the platform, and the vote was – by a slight margin – yes. So there’s that.

As for Shaq and West (or should we call him Ye?), it all started when Shaq had some critical comments about Boston Celtics player Kyrie Irving for allegedly supporting an antisemitic online film. Those comments bubbled over to Ye as well, and the fire around the whole thing is still pretty hot.

Speaking about Irving and related matters on TNT’s Inside the NBA, Shaq had commented: “It hurts me sometimes when we have to sit up here and talk about stuff that divides the game. Now, we have to answer for what this idiot has done.” Shaq got plenty of support for those words from other Inside teammates, especially Charles Barkley. 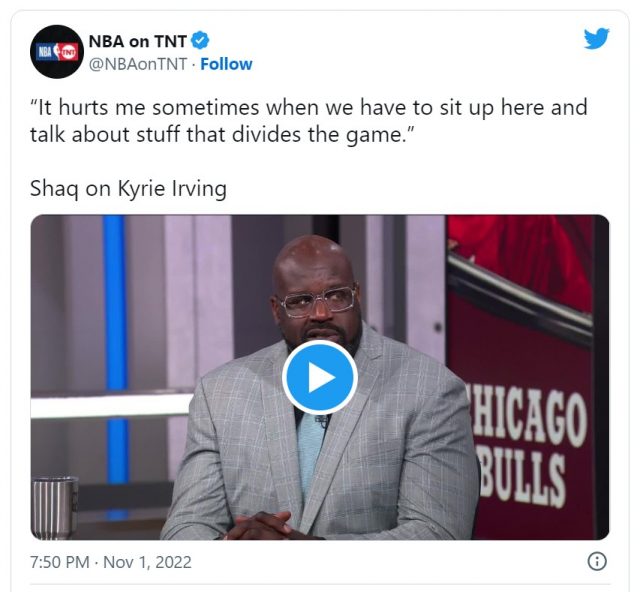 As for Ye (or West, as the case may be), he’s openly questioned O’Neal’s business deals, and he’s also expressed support for Irving on Twitter. A lot of that defense was aimed at O’Neal and his business dealings with Canadian billionaire Jamie Salter, who is part owner of ABG, the marketing and entertainment company that is heavily involved with the Shaq brand

Ye had some strong words about O’Neal’s business dealings, especially who had the real control of the big man’s licensing and financial interests. That led to Shaq using some of Ye’s own rap lyrics to answer him back.

Shaq: “Believe me you don’t know me like that,” he said. “Worry about your business, and to quote the once great Kanye west ‘I got more money than you, so why would i listen to you’ take my advice get your family business in order. Have a great day brother.”

All that has led up to the latest comments on the Big Podcast. For the complete talk, you can click on the image below to go to the YouTube version of the program. 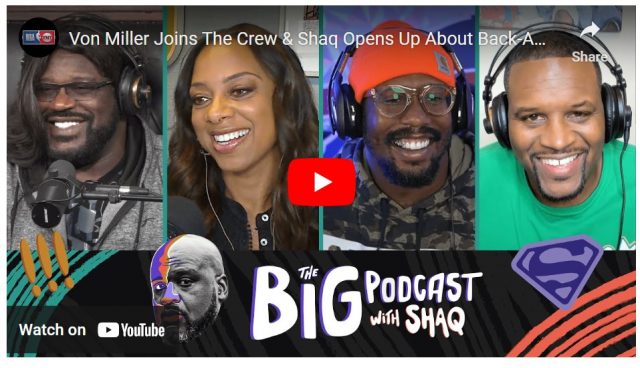 Along with Shaq’s comments, podcast host Nischelle Turner read a long list of traits which describe a narcissistic person. According to the list, some of the traits of a narcist include exaggerated sense of self importance, entitlement, a need for constant admiration, expectations of being recognized as superior and exaggeration of talent.

O’Neal admitted to his audience – he’d had all those traits at one point in his life, but he matured after going through a divorce and seeing his wife take their children with her.

“When mama left, when the kids left, when my career was over,” he said. “You know how you fix that? You gotta humble yourself. That’s why I am where I am now. I don’t look down on people because they’re lesser.”

Is this the end of the story? Probably not. We’ve seen that Ye / West / Kanye has a strong desire to keep himself in the spotlight. Latest – and largest – evidence for that to date – just over the past weekend (again, as of this writing), West told a popular conservative blogger and YouTuber that he was himself running for President in 2024! That should be interesting….