Yet another one of those popular “best of” lists is out, and this time, our man Shaq doesn’t like it. One bit. No sir, not one bit. What’s the list for? The list is all about the best dunkers in the history of the game, and our man is way, way down the list. Impossible? Read on…

Now, we do need to say right up front that we’re not at all sure how this list was exactly put together, and we’re not sure who did the putting-together. Here at the ShaqFu Radio blog, we’re giving a tip of the hat to our friends at LakersDaily.com for originally posting the list… but we’re pretty sure they didn’t come up with the list originally.

Why doesn’t O’Neal like the list? Well, pretty simple, really. On that supposed all-time great dunkers list, O’Neal himself is pretty far down the rankings. Crazy, right? We know!

The list separates out these “greatest dunkers” into six different levels, or tiers. In that top, first tier, there’s only one name: Vince Carter. Before you start scratching your head (like we did here at the offices of ShaqFu Radio), here’s a little background that may indicate why Carter – who we definitely love and who definitely had the skills – came out on top:

Seems the list was not just from overall game highlights and stats across a player’s career. The list also – for reasons not entirely clear to us – includes a players performance (or multiple performances) at various league Slam Dunk Contests, usually held in conjunction with the mid-season All-Star game.

Plenty of players and journalists covering the game agree that Carter – an 8-time NBA  All-Star – was certainly one of the greatest dunkers in history. As part of their case, they point to his amazing performance at the 2000 Slam Dunk Contest. To this day, it’s still considered by many to be the best performance in the history of the event. 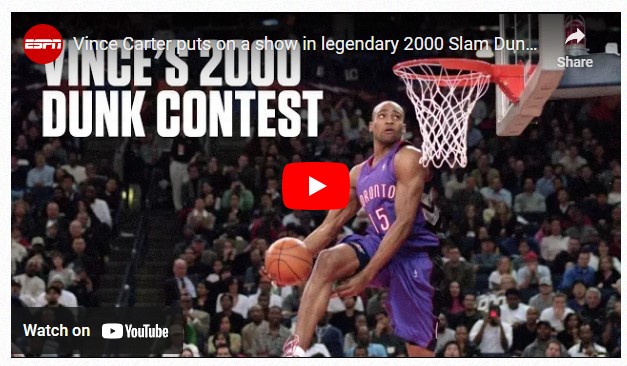 Now, as for Shaq, he certainly had an amazing and dunk-filled career, but he never (never!) appeared in a Slam Dunk contest. Crazy, we know… but true.

Contest appearances or not, Shaq was the creator of some of the most iconic power dunks ever seen at the time – or since. So when he did not appear in the top tiers of the list, O’Neal was quick to show his – shall we say? – disappointment. See the big man’s IG post below.

Who’s near the top of the list? Well, along with Carter in the number one spot, Tier 2 includes Dominique Wilkins, Michael Jordan and Doctor J – Julius Erving. LeBron, Kobe and others are in Tier 3, and Shaq makes the list down in Tier 5. Really?

It was interesting to see where Bryant landed on the list. Again, that may have been due to a big-time performance in the Slam Dunk Contest in 1997 – his rookie year. After that, Bryant opted out of participating in the contest afterwards.

As for James, he’s never participated in the Slam Dunk, so it’s a little weird the way the Tier-based rankings list all the players on the list. That’s probably one of the reasons Shaq blasted it.

Obviously, we don’t need a list to know who are favorites were – and are – in the NBA today and from the past. Reacting on Twitter, one fan posted a quick video of a power Shaq dunk with the caption stating that one dunk alone should have put the big man in Tier One. Couldn’t agree more! 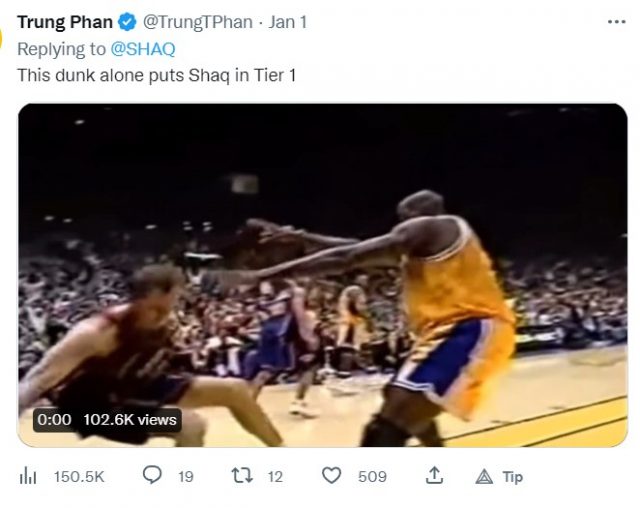